I parented too many years without knowing the agony of caring for a child with an ear infection. Now it was time to pay my dues. My 3-year-old son seemed uncomfortable when I put him to bed, and the restlessness increased throughout the evening. By the time it was my turn to crawl into bed, it was difficult to console him. My husband and I took turns holding him in the rocking chair where he would doze for brief periods, then wake up screaming and holding his ear. My heart broke for him. I think I cried with him during some of those times.

It escalated to excruciating pain and we made the decision to take him to the ER. By this time it was nearing midnight. I quickly grabbed my phone and keys, buckled him in the car, and we were off. On the way, his pain increased further and his cries grew to a new intensity I hadn’t heard before. It was so hard to keep my hands on the wheel and keep driving. Everything in me wanted to pull over and hold my son. 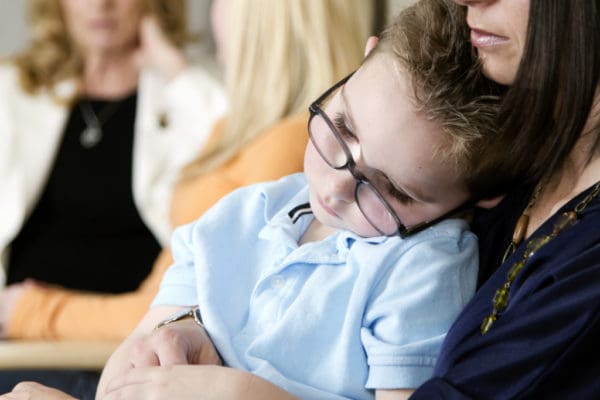 After what seemed to be forever, we arrived at the hospital. I carried my sick and crying child into the ER, joining other families with sick little ones. I thought about the families in that room, and other parents around the world, seeking medical attention for their children and the lengths they also go to for them. There was a unique sense of unspoken camaraderie as we each sat comforting our children and waiting to be called to see a doctor.

Thankfully, my son calmed down some and was sitting in my lap, snuggled against me watching the Disney Channel. (Wanna know what’s on the Disney Channel from midnight – 2am? I’m your gal.) Suddenly he became agitated again and started shifting. He opened his mouth a little and coughed and gagged and – you guessed it – erupted in a volcano of puke.

I can only describe it as a volcano because it was all over his shirt and pants, my lap, legs, shoes, and hands, and a big puddle right there on the floor in front of us. I was covered in wet, warm puke and completely overwhelmed. I literally could not think of what to do. There were no tissues or paper towels near me, I didn’t want to get up because I didn’t know where to put my puke-covered son, and I didn’t want to track puke everywhere. And anyway, if we wiped ourselves off what good would it do because I had no other clothes for us! In my haste to seek medical attention, I grabbed NOTHING from home for us. Puking was not on my radar. To top it all off, I was processing this entire ordeal with my sleep-deprived mom brain which had been awake for 21 hours.

I did the only thing that came to mind – I looked with pleading eyes at the family sitting near me and asked, “Can you get me help from the front desk?” Within minutes, the puke cleanup crew was there with tissues, paper towels, disinfectant wipes, and lots of garbage bags. I clumsily wiped off my son and I as best I could, apologizing profusely the whole time. The staff reassured me that it happens all the time, at least once a night. Ahh, so I had the puker tonight.

I was mortified for being responsible for the stench in the waiting room. These poor families waiting with their sick kids now got to sit with this awful odor! Even though I cleaned up as best I could, we stunk.

I saw the mother of the family near me glance over a few times. I remembered them from when we checked in. She came to the ER with her sick toddler and two upper elementary kids. At check-in, I overheard her older boy translating for her to the doctor to ensure all the critical information got through accurately. I admired their family and how they worked so well together. My heart went out to that mom at check-in; I recalled when I was in Ethiopia and my infant was sick. Not knowing the language completely, I had to rely on translation to communicate with medical professionals.

This mom in the waiting room began digging in her bag. She produced a piece of clothing, gave it to her daughter, and then gestured toward me. The daughter walked over and gave me a polo shirt the exact size my son wore. I hesitated. I didn’t know how I would return it to her. I didn’t want to take her extra outfit – after all, she had thought ahead – I didn’t. And what if she needed it later? What if they were admitted? Who was I to accept this kindness?

But she insisted. So with a humble, grateful heart, I accepted. I felt broken and undeserving of this gift, but accepting it made me feel loved and seen and cared for. I don’t speak Spanish fluently, but I knew enough to tell her “God bless you, thank you.” And she may not have spoken English fluently, but she said to me in English, “You’re welcome.”

Motherhood is its own language. We didn’t need all the right spoken words that night; her heart simply spoke to mine through the gift of a shirt.

From that night on, every time my son wore that shirt I thought of that fellow mom and her kindness toward me. Recently my son outgrew the shirt and put it in the thrift store pile. When he wasn’t looking, I pulled it out and kept it! I can’t let go of it yet. I don’t want to forget that night and how another mother’s generosity and support surrounded me in my crisis. I never want to forget, so that I can be that kind of fellow mom to those who cross my path. 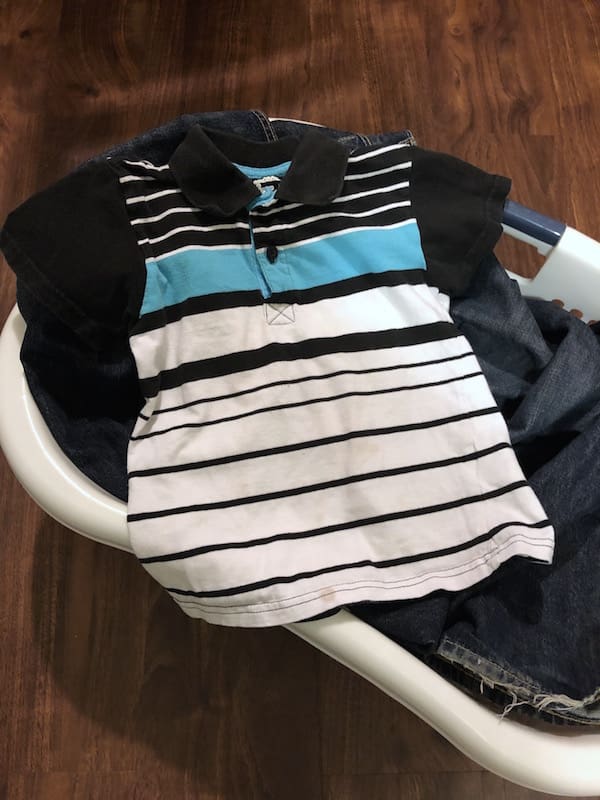