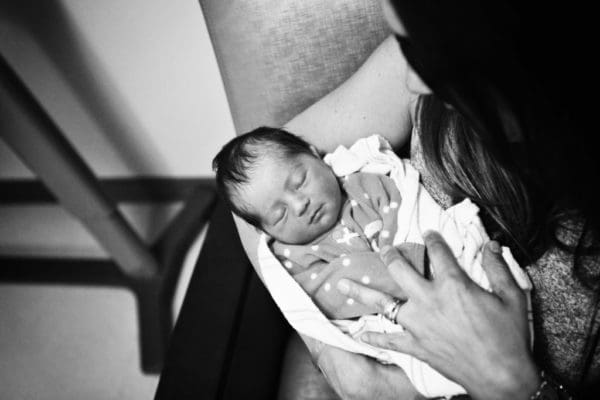 This time of year I find rhythm with the rain; it splatters against the overflow pond in my backyard and I feel the beat of my heart, the memories flooding in like the rushing creek from the nearby lake’s melting ice.

A couple we had grown to love in Arizona. A baby girl that we prepared a room for in hopes of adopting her, who ultimately had a different path laid out for her. The devastation, the mix of understanding and grief rolled into one, the confusion and yet deep, resounding love fighting for room in my heart. The rainy season that followed our disrupted adoption in 2017 matched my spirit’s response to it all. And I welcomed it. I knew that after the rain there has always been new growth. This grief wasn’t new to me, different, but not new.

Six weeks later we received a phone call: “There’s a mama in labor, not sure of any details yet, but I’ll let you know as soon as I know more.” Nine minutes later the adoption agency called back to let us know a baby girl had been born. We gathered together with our family to pray at my oldest sister’s leading. We prayed over this baby girl’s life, we prayed over her birth mama’s heart, we prayed that God would lead. Over the next 24 hours, we went about life-at-the-lake. We continued our family’s large pickleball tournament. We fished from the dock and rode four-wheelers in the woods. We had a fire by the water and played Fast Track, a family favorite. I also did a lot of pacing and prayer, for baby girl and her mama.

I wanted what this sweet mama wanted; for the decision to be HER decision. For her heart to be guarded and protected. I desired her to feel heard at the hospital by the nurses, social workers, and anyone who was supporting her. I was learning so much in this journey we had started a year before, but at this point, I had walked a hard road with a birth mama I had deeply loved and mourned. I was also a mama to three handsome boys and had three babies in Heaven.

I knew what it was to desire something and then feel a loss of control. I didn’t know her dreams. I had never met her or seen a photo of her. I didn’t know all of the intricacies of the choices she had in front of her. I just knew she was pursuing something that she felt was best for her and her child. I wanted to honor and respect whatever direction that lead her.

My three sisters, brother and their sweet families all left the next morning, a bit reluctantly. Along with my parents and my husband’s family, they had graciously walked this journey with us, had supported us financially, but most importantly, had loved us HARD every step of the way, even when they were uncomfortable with some of the avenues of adoption we had pursued. We promised to update them as soon as we heard more.

That phone call came at 12:22PM on Memorial Day, “She chose you. Baby Girl is here waiting for you.” The next twelve hours were a blur: crying joyful and anxious tears with my parents in the backroom at the lake, telling our boys and witnessing their sweet reactions, sending our siblings a picture of an empty minivan indicating we were driving home alone to go and pack, the conversation we had on the 4-hour drive back to the cities, the pleading case we had nailed down in case a state trooper happened to pick us up for speeding, the fears, and questions we unpacked about Baby Girl’s health.

Then, opening the door to our home knowing the next time we entered we would be a family of six. Running around frantically getting everything packed. Then being immediately stopped by the weight of it all, finding each other in the house, hugging, crying some more, then back to a frenzied mode of packing to make the only remaining flight from Minneapolis to Arizona.

One of my favorite memories is arriving at the airport with an empty stroller and car seat, the looks and stares, the questions and some clapping. Strangers. Yet their excitement and curiosity was a beautiful, tangible display of what was going on in our own hearts. The flight was, shockingly, quite peaceful (that was largely in part because we were flying ALONE for the first time in a while). More than that, we felt secure in taking steps forward, as we knew we were meant to do, but also recognizing that none of this was in our control. There’s a peace that settles when you surrender when you lay it all down.

We didn’t land in Arizona until after midnight. As we were renting our car, the agency director called to tell us she would meet us at the hospital. Up until that point, we weren’t sure if we could see the baby that night. It was another emotional flood as we recognized that she was taking this so seriously and understanding how far we’d traveled and hustled to get there. Her graciousness in our situation was so appreciated.

We got to the hospital and found the red emergency phone on the wall that is meant for after hours. I picked it up with shaky hands and said, “Hi, we are Brian and Jacquelyn Senske. We are supposed to be adopting a little baby who is already born, not sure if we’re at the right place,” and the kind receptionist told me we needed to go down another wing to the next red phone. I repeated the same message to that receptionist and she said excitedly into the phone, “Oh you’re here! You guys, they’re here!! Yes, come in, come in…” and she, along with the agency director, and a handful of very sweet night nurses who loved the abnormal happenings that particular night, met us at the table to go through the necessary paperwork.

At this point, we knew that her first mama had been discharged from the hospital so Baby Girl was in the nursery waiting for us. When we entered we saw two babies. One was being looked after by a nurse near the door. I said, “Is that her?” and the director said, “No, she’s over here,” and led us to a bassinet that was pushed up against the wall. Time stilled. I remember every step over to that bassinet, every rocking chair and baby item we saw.

We leaned over, peeked inside, and saw the tiniest, most lovable little girl I’d ever laid eyes on. All 4lbs 10oz of beauty and wonder. We just stared and hugged each other, tears blurring my vision. “You can pick her up you know…” were the words that got us out of our trance as I bent down to hold my daughter for the very first time.