It started out as an ordinary night, like so many others in our home.  Our youngest son was curled up on my lap, sucking his thumb while we watched Moana.  Our middle son was building a skyscraper out of Legos on the floor at my feet.  And our oldest son was in the bathroom, doing his business.

Or so I thought.

“Mama, mama, mama!” he exclaimed as he came skipping into the living room.  “I cut my hair with the scissors. I’m Hunter again! I’m a boy again!” 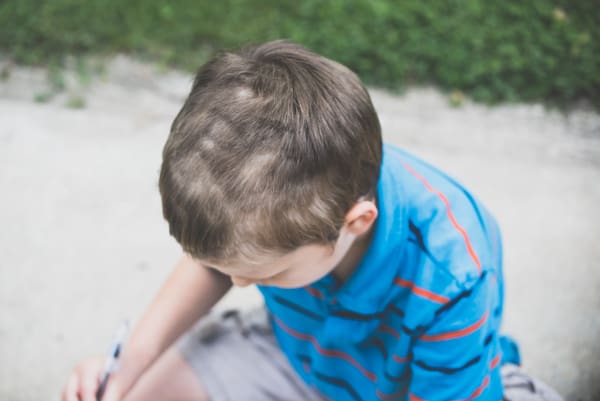 One look at his sweet face with missing front teeth and I was shook to my core.  As soon as my eyes met his, I knew with absolute certainty that this was a moment I had to get right. It was a flash, a strike of intuition.  Seeing his eyes searching mine for validation and approval was a moment of pure connection. One that was so intense that here I sit weeks later still struggling to find the right words to describe it.  I couldn’t shake the feeling that this was one of those few defining moments that will happen in our lifelong mama/son relationship.

I took a deep breath and concentrated on his smile to ground myself  while I composed my thoughts into a simple and coherent response.  It felt like a lifetime, but it was really a few seconds.  So many feelings were swirling through my heart at that moment – worry, fear, doubt, humor, and love.  Love was the strongest of them all.  I remember being very conscious of that feeling and concentrating solely on it as I thought of what to say.  I visualized my love for him as thousands of little heart-shaped bubbles floating up from the pit of my stomach to my mouth.  I remember thinking, “Let him only hear love in your voice.  Let him know you are proud of him and that you are happy that he is happy.”

I smiled, gave him a big hug and told him that he did a really good job cutting his own hair.

See, the thing is, Hunter has autism. 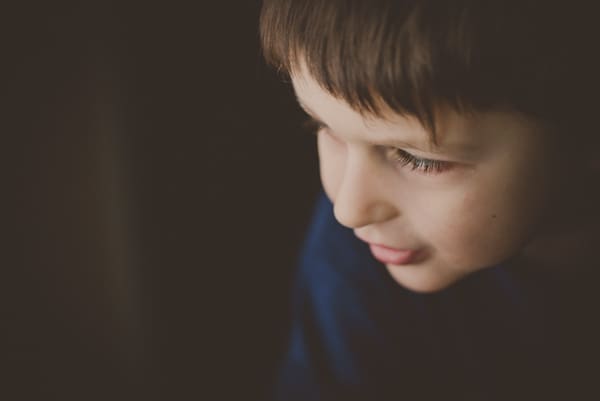 Haircuts are a traumatic experience for him.  He is terrified of clippers.  He  moves around so much that using scissors is out of the question. We have yet to venture to a salon or barber because we’ve figured out a little routine at home that works.  There are other sensory related aspects to haircuts that affect him – the feeling of hair falling down his face or neck and the sensation of the clippers vibrating and buzzing around his head.

He almost always looks shaggy because so much time passes between haircuts.  We have learned that his haircuts are less traumatic to him when we let him decide when they happen.  When he says he wants a haircut, my husband and I basically drop everything and make it happen.  So far, that approach has worked well for us.  We have found that letting him exert some control over the things that impact him help him gain confidence and independence.

After he gave himself the haircut, he was a little chatterbox the rest of the night.  He’s usually a pretty quiet kid, taking in things around him and processing.  Seeing him so excited and sharing what was on his mind felt like a turning point in some ways.  It was one of those beautiful moments since his diagnosis two years ago that I feel a little less worried about what his future holds.

The real punchline revealed itself the next day.

I emailed Hunter’s kindergarten teacher before school to warn him that Hunter would look markedly different than the day before and that Hunter was immensely happy with his new look.  Mr. M’s response was pure gold:  “This makes my whole day! That is funny and so cute. I can’t imagine what your reaction was.  It’s also funny because yesterday at the end of the day – out of the blue- he said, ‘I’m going to cut my hair with scissors.’ I didn’t think he was serious!”

It turns out that his plotting and planning was much more in depth than I realized.  I now know that when he was getting his crayons and color book out of the cupboard, that’s when he grabbed his little red safety scissors.  This one event was a small window to the future.  A future that will continue to reveal itself day by day that he is more capable than I’ve dared to dream since his diagnosis two years ago.  The fact that he came up with his own little plan, executed it and then proudly shared about it makes my mama heart happy.  And it silences many fears about him, his capabilities and his future.  His mind is a beautiful thing when he chooses to reveal a bit of what’s inside it. 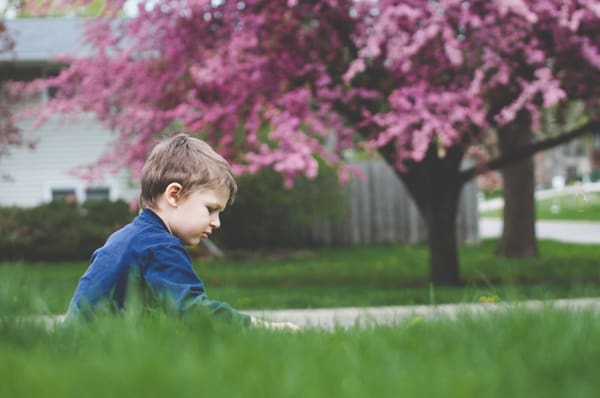 For him to express his desire to have a haircut, then do it himself with so much independence is HUGE. Never mind that it’s a complete hack job. He had an awareness of his identity.  He was able to identify a physical change that helped him feel more like himself.  To have those kinds of feeling at six-years old and be able to name them is pretty amazing – special needs kiddo or not.

But the best part of this whole incident?  It was knowing that he felt safe sharing his joy with me and that he’s speaking up for what he wants.  It told me that I must be doing something right with my mothering.  Also, if you’ve learned anything about autism, you’ll know that advocating for themselves can be an area of difficulty.  While it doesn’t mean that he won’t ever have difficulty, because we still see that frequently,  it does mean that he is capable of learning how to advocate for himself and it’s one of my jobs as his mother to help support him in that.

When I think back to this evening, I smile.  My heart swells with pride for my son and for myself, too.  I can name a hundred times when I feel like I’ve been a horrible mom.  I can name another hundred times when I’ve been too rushed to really see what’s in front of me.  But this moment?  This one I know I got right.  And it’s locked up tight in my heart so the next time I screw up a mama moment, I remember to give myself grace.

So, mamas,  if you find yourself looking at your child after they have performed their own artistry on their hair, my unsolicited advice to you is:  take a deep breath, look into their eyes and focus on what you see reflected.

Choose to see that little person in front of you for who they are in that moment before you look at what they’ve done.

You’ll be so glad you did.