There are two kinds of pregnant women: those who glow and those who grow.

The glowers love being pregnant. Their pregnancies are magical and sparkly. They wear their normal pants until they’re eight months pregnant and have gained a whopping 10 pounds the whole pregnancy, but claim to be eating like crazy. Their skin is flawless like a porcelain doll or Kim Kardashian’s rear. There’s a constant angelic glow about them.

The growers glow, too. But it’s more like a green radioactive glow than a heavenly one. No thanks to the constant morning sickness (or toxic gas…). I mean, why do they even call it “morning?” It’s just instilling a false hope that by noon it’ll be gone. Lies! Not to mention it lasts way past the old three month marker. And by the time it does subside, you’ve gained 50 pounds despite barfing the whole time. Oh! And you switched from normal pants to maternity pants before you left the bathroom with the positive pregnancy test because you already looked five months pregnant. On the plus side, your skin is also flawless…underneath all that sweat and excessive hair sticking to your face. At least your boobs are huge. Maybe too huge because every time you put a shirt on it’s like Bruce Banner turning into the Hulk.

Yeah, I was a grower. Don’t get me wrong, I was overjoyed to be pregnant! I understood the blessing it was. But it definitely was NOT this picturesque image you see in movies and commercials. I slept in a lawn chair for two months from back pain. I dry heaved every time I was hungry. And for the love, my feet would not stop itching! The entire pregnancy felt like an uphill marathon and I was struggling to get to the finish line. But as miserable as I felt, my pregnancy a healthy one.

Until about 32 weeks. My excellent blood pressure was running high. Not technically considered high, but higher than my usual. So, my OGBYN ran a blood test and discovered I had elevated liver enzymes. They continued to test for preeclampsia and HELLP, but I wasn’t showing any other symptoms. To be safe, for the next few weeks I had twice weekly appointments to monitor the baby and enough ultrasounds that I lost track.

Around 36 weeks, my skin, specifically my feet, really began to itch. It wasn’t an itch like a mosquito bite where if you scratch it long enough it goes away. No, it was far more sinister. It was a deep itch and no matter how much I scratched and clawed there was no relief. I dug at my skin until it bled, and still no relief. I knew itching was common in pregnancy, but my feet had scabs on them! When I casually mentioned the itching at my next appointment, my low-key doc went into high gear. He called and set-up a high priority appointment with a maternal fetal medicine (MFM) specialist, wrote me a prescription and got very serious saying, “have this immediately filled downstairs at the pharmacy. Do not leave this building until you’ve taken the first dose.” A couple days later the MFM confirmed that I had something called Intrahepatic Cholestasis of Pregnancy (ICP), a liver disorder unique to pregnancy that affects the flow of bile resulting in higher levels of bile in the blood, which can be life-threatening to the baby. Doctors don’t fully understand what causes it and estimate it affects about every 1 in 1000 pregnancies. The MFM also informed me that cholestasis pregnancies are usually induced at 37 weeks. Excuse me, what now? I was 36 weeks, with a MONTH of things I still needed to do before I had a baby! And then she tells me there’s a 60-90% chance I’ll have ICP with future pregnancies too. #Overwhelmed

The next day, I met with my OBGYN and he said there was one more test to do to prepare for my induction, something called a Group B Strep test. Hmm, I don’t remember reading about that one in my What to Expect book and my sisters never mentioned it. He explained that I needed to undress from the waist down and cover myself with a towel about as thin as a wet napkin and about the same size.

A couple minutes later he returned, and while I was on my back with my feet in the stirrups, he quickly explained where this test was going to occur. I did my best to keep a straight–HOLY Q-TIP! I think I just pooped! He stood up and explained he was going to run the test and call to schedule my induction while I get dressed, and he left the room.

The whole thing was so fast that it took me a second to process what just happened and to confirm that I had not pooped. Then I slowly started to sit up to get dressed, and…oh my butt cheeks! He left the door WIDE OPEN. As wide open as my back side! WhatdoIdo? WhatdoIdo? WhatdoIdo? Maybe someone will walk by and close it? NO! What if it’s not another medical professional? What if it’s another patient WITH SMALL CHILDREN?! So I rolled my exposed self off the exam table and waddled to the door, with a resemblance of Violet from Charlie and the Chocolate Factory. With one hand I held my napkin over whatever I could possibly cover under my big belly, and with the other hand I closed the door. Phew! No small children walked by and saw the very pregnant pantless woman holding a napkin over her lady bits! Crisis averted.

A week later, I gave birth to a beautiful baby girl on my sister’s birthday in June. How appropriate that she’s a June baby, because it’s also ICP Awareness month. I didn’t have a chance to learn about the condition at all before I gave birth, but I researched after. It was then I realized just how blessed we were.

Intrahepatic Cholestasis of Pregnancy is incredibly unpredictable. Doctors don’t fully understand why certain people get it and others don’t, or what causes stillbirth with ICP. If untreated, a stillborn risk is as high as 15%, but with proper medication the risk drops to the same as a normal pregnancy. Testing is a bit behind with ICP too. A bile acid test, the best indicator of ICP, takes about two weeks to get the results, but a person’s bile acids can be unpredictable during that time as well. A proper diagnosis and proper medication is the best and safest solution to ICP. 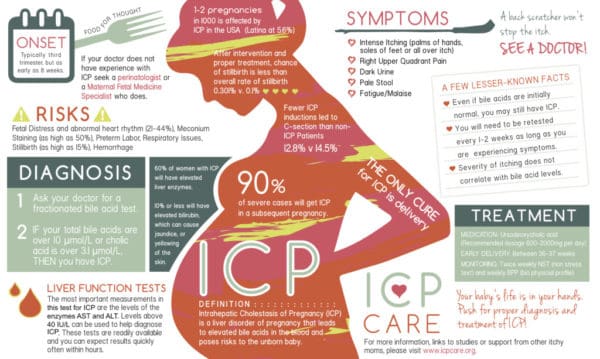 {Used with permission from ICPcare.org}

I think back on the whole situation and get teary eyed at how lucky we got. Would my daughter have survived to 40 weeks? I don’t know how severe my case was, but that’s the thing about ICP–it’s so unpredictable if left untreated. I am so deeply grateful to my doctor who was overly cautious when my blood pressure was higher than normal and who didn’t brush off my itching as dry skin. He very well could have saved my daughter’s life.

I did have ICP again when I was pregnant with my son, but because my doctor knew to watch for it, it was immediately diagnosed and medicated. My son was also induced at 37 weeks and is a healthy, crazy 1.5 year old. I did itch again, but it wasn’t nearly as bad. Even mild enough that it could be ignored by someone unaware of ICP.

ICP can present very differently in the women affected by it. Some will display other symptoms of ICP, but not itch at all. But being aware of the symptoms and not ignoring it can save a life. From sharing my experience, I know two women who requested to be tested for ICP and were immediately induced. #FightTheItch 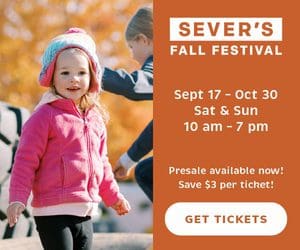