I wasn’t keen on getting one when we had our first born, but then a generous friend gifted us a video monitor. Turns out, it was awesome! I could watch our sweetly sleeping, or breakdancing, baby from the comfort of my own bed. I could turn up the volume to hear her singing to the world in the morning. It was pretty cool technology after all.

But it also interfered with my sleep. Our house at the time was small enough that we didn’t need the volume on in order to hear her from the other room. But the orange to red lights would still flash on the monitor when she made noise, which I had already heard anyway. Yet I still felt compelled to pick up the monitor to see her, even though 9 1/2 times out of 10 she would put herself right back to sleep. Not me though, I was awake and would struggle to put myself back to sleep – checking to make sure she was really settled, listening to my partner softly snore, listening to my dog loudly snore – some nights it would take me an hour to fall back asleep after a tiny hiccup from the other room woke me up.

Eventually there were nights that I’d turn the monitor off. Or wouldn’t hear her at all. Then I was pregnant and so tired from that and a toddler that I could sleep through anything (except for the third trimester, obviously). But most nights it sat there waking me up at least once a night. When it was time for baby monitor #2, I didn’t even think about it, we just bought one. And then there were TWO on my bedside table. Snatching my sleep.

So I unplugged them one day. Took them down from the wall, took the handhelds off my table and threw them in a drawer. My daughter was barely three and my son had just turned one. And it has been pure bliss ever since! 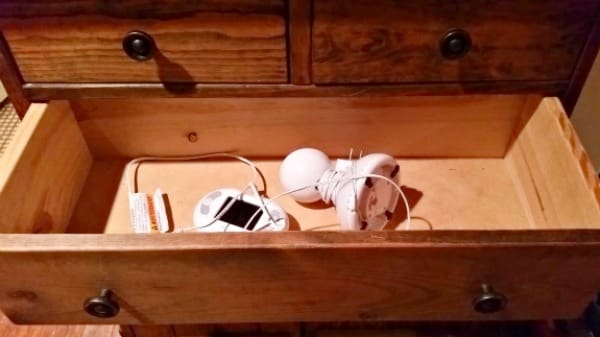 I can still hear them if there’s really a problem. The preschooler will call our names or holler with all her might until one of us opens her door. The toddler has a serious wail when something’s not right. Otherwise, I don’t need to hear them. They both sleep through the night without fail unless there’s a legitimate reason. So if I actually wake up from them, it’s because they need me. Their other little noises and sounds don’t taunt me anymore.

And now…I’m the one sleeping like a baby. My partner got me an eye mask to block out any slivers of light. I even wear earplugs. (Like I said, I can hear them when I need to!) I am no longer a servant to the baby monitor. My sleep is now uninterrupted and peaceful. Ahhhh!