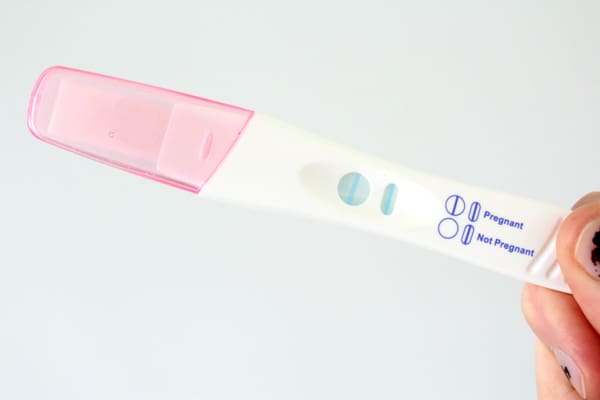 My husband and I only waited a year after we were married before we started trying to have a baby, but month after month, we kept getting negative pregnancy tests. Nothing seemed to be wrong, and it felt like our lives were defined by infertility. Eventually we ended up at a fertility clinic after 15 months of trying. With the help of an IUI, we got pregnant with our first child. We couldn’t have been happier to see those two pink lines.

When he was eight months old I weaned him and stopped breastfeeding. Because it had taken us so long to get pregnant the first time and because we never really found out why, I didn’t want to go on a pill and mess with my hormones. We knew we wanted more children, but we planned on waiting a while before trying for our second. Apparently my body had figured out what was up because when he was 10 months old, we found out I was pregnant again. We hadn’t been trying, but we hadn’t really been preventing either. Regardless, it was a bit of a surprise. Eight months later, our daughter was born.

Having two kids 18 months apart has been wonderful, but also a challenge. The first year was pretty rough, and having two kids under two, both in diapers, both needing constant attention, was exhausting. Moving to a new state in the middle of that year definitely didn’t help either. But we made it, learned to love it, and were happy with our family, even if it hadn’t been planned out the way we imagined.

Almost two years later, my husband graduated from medical school, we had just moved to another new state and bought our first house, and we were about to start another new adventure. We were comfortable, content, and ready for the dreaded first year of medical residency–the intern year. We knew it was going to be hard, but we felt prepared and we were ready to face it together.

A few days after we got back from his graduation ceremony, I started feeling a bit sick. We had been using condoms, so I was pretty confident that I wasn’t pregnant. But then those common pregnancy symptoms started hitting me like a train, and I figured I’d better take a test just to make sure.

The next morning, I snuck out of bed while my husband was still asleep and took a test. I couldn’t look away from the result window, so I just sat there and stared at it. Within a minute, two pink lines showed up. My stomach dropped, I felt sick (and not from the morning sickness), and I was filled with dread. Not just because I didn’t want another baby right then, but because my sister had been trying to get pregnant for over a year without success, and here I was pregnant after trying to prevent it.

The thing I’ve learned from having three kids, one very much planned, one not planned, and one a huge, scary surprise, is that all babies bring joy, fun, and laughter, no matter how they come into our lives; it might just take a while to recognize.

I love each of my three kids more than I ever thought it was possible to love someone, despite the different circumstances surrounding their conception. We weren’t ready for all of them, but they’ve each changed me for the better, and my life wouldn’t be as full and happy as it is now without each of them.

No matter how you see those two pink lines, congratulations.  Your child’s story has just begun.