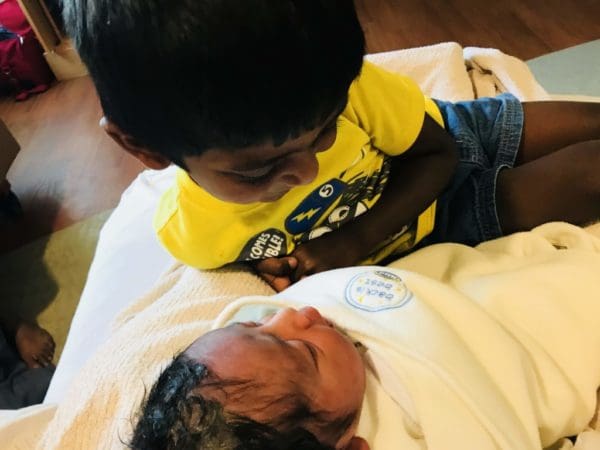 It was a summer night and we were watching The Incredibles at the park. I got up to go to the restroom and realized my stomach was being pulled down, which had never happened. When we returned back home, I was so sleepy that I told my husband, “Sleep light! I might wake you in the middle of the night”. I did and we welcomed our second boy the very next day!

This was my second pregnancy and totally different from the first one for various reasons. One of which was that both happened in two different countries. During my first pregnancy, I had my parents living near us, ready to help me out at any time. When I was laboring with my firstborn, Jivin, I had three other women birthing in the same room (with partitions) as me. The labor was around 6 hours and I felt so lonely, as I went through my labor in a room where I was with people whom I merely met for the first time. My husband was not allowed in there with me as per the hospital rules.

The providers also didn’t give updates on what is happening, like they do here. But I really had trust in them or else I wouldn’t have been there in a room full of strangers. They did a pretty good job of helping me to bring my boy into this world. My doctor advised me not to use an epidural, as that would delay my labor. She talked to my husband and when he asked for my opinion (that was the only time he was allowed inside), I had already made up my mind on not taking the epidural. I wanted to get that delivery over with as soon as possible.

At 3 cms dilated and 3 hours into my labor, I found myself not able to deal with the pain properly. I was only allowed to lie down. I was not allowed to sit up or move around, so as to monitor the baby’s heartbeat. All of a sudden, I found myself talking to my baby. (At that point I did not know the gender of the baby as it is against law to find out the gender back there). I was whispering “Baby, please come out soon, don’t hurt me so much. Daddy and the whole family are waiting outside to meet you.” After 20 -30 minutes, I was 5 cms dilated.

At that moment, I realized that babies could really hear us from inside. I just kept praying throughout, and I never felt alone. I knew my baby was there, helping me through this. The next hour my labor was progressing so fast, at one point the nurses were searching for his heart beat only to realize, he was really low below my abdomen. The doctors rushed in and I was fully dilated. The next half an hour involved lots of pushing. And then there he was with lots of hair and the doctor wishing me (just like in Indian movies), “Congratulations! You delivered a baby boy.” 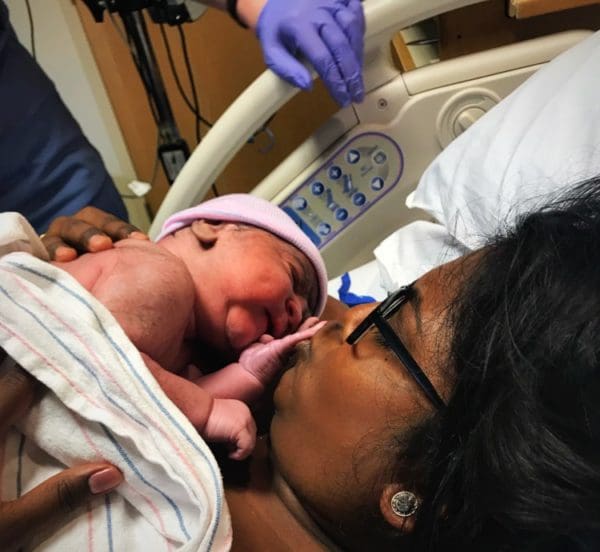 During that moment, I just wanted to be with my husband. Jivin was born at 6:37 pm. My husband didn’t get to see him until around 8:00pm. As soon as they were done with me, the doctors and nurses had rushed to the woman next door who was ready to deliver. So, my husband had to wait until the nurses were back to see his son.

Finally, when the moment arrived, he had to share it with ten other people waiting there (including my relatives and his). He hardly got to hold him for longer than a few minutes. By the time we (Jivin and me) moved to our own private room, it was late – around 10:00 pm. (I merely got a moment with him alone). My husband had to leave for home, as the husband isn’t allowed to stay overnight after the wife gives birth (as per some traditions). Jivin and I missed him a lot that night. My mom stayed with us at the hospital.

There was this rush in me where I felt so normal and energetic. The nurses were there helping me out of the bed to the restroom. I was so confident about doing it myself and I ended up being unconscious for a few minutes. All I could see was a white light and the feeble voice of my mom calling me, which made me realize how much stress my body had gone through. I was reliving those moments, that whole night and eagerly waiting to meet my husband the next day morning.

By the time of my second birth, I would say I was a completely different person. I was not that girl who was confused and taking opinions, advice, and suggestions from every person she met. I felt myself to be more adult this time. Embracing my pregnancy in a positive manner, I did not let it affect my regular routine. One of the reasons for keeping my routine was my then 3-year-old, who was completely dependent on me.

I took a trip to Las Vegas, went swimming, and was as normal as I was before getting pregnant. Actually, all these activities would be frowned upon where I come. Not only that, but we had a gender reveal, a photo shoot, and the list goes on. I not only enjoyed every moment of my pregnancy but also learned more about the labor and delivery process here in the US.

On the day of my labor, I woke up at 5:00 am to find out that I had lost my mucus plug. Even though I knew this does not indicate I’m in labor yet, I called my provider to confirm the same. After an hour, I could feel mild contractions. I went out for a walk to feel better; the contractions did not seem to go away. I knew I was in my early labor as the contractions were more than 6-7 minutes far apart. Coincidentally, I had my 38 weeks check up that same day at noon.

I continued walking by my street all morning, hoping the baby would be out that day. My boys were comforting me all this time. Jivin was thrilled about the baby’s arrival, but more than that, his excitement was due to the fact that he got to spend time at his friend’s house. Once I told him of the plans to stay with that friend, he started looking forward to it eagerly. Since we couldn’t bring our family back here to help us out with Jivin at the time of delivery, many of our friends were kind enough to offer support. We weren’t sure what was about to happen, so we dropped off Jivin at one of our family friend’s house as planned before we headed for my appointment.

I was a little more than 3 cm dilated and almost 100% effaced, so my gynecologist suggested to get admitted to the hospital that was above the clinic I visited. Since there was slow progress in the labor, even after walking for an hour in the labor ward, the nurses suggested to go home and come back once my contractions got intense. We agreed, as we didn’t want to wait there any longer, leaving Jivin behind. (Jivin had never stayed anywhere without me).

By the time they brought me the discharge papers, I could feel my contractions getting intense and more painful. The nurses suggested I hang out in the labor lounge on the hospital premises so that I wouldn’t need to rush back from home with the baby almost in its way out. I hardly could walk to the lounge. I spent 30 minutes tracking my contractions and knew this was it.

We called the nurses back and they asked us to get admitted again. I went back up at around 5:30 pm, to find that I was 6 cm dilated. I was so happy that I was going to deliver that baby before Jivin’s bedtime (all through this time I could only think of him) and he would get to meet his baby brother. (Our friends lived in the same neighborhood, which was just a little more than a mile away from the hospital).

The next 2 hours involved in a lot of breathing and crying. The choice of an epidural was again off the table, as I believed I could do far better than the first time. At one point, I felt like I might need it. By the time I had that thought, I was more than 8 cm dilated. I knew I could deliver him before the anesthesiologist comes in.

The nurses who came along this delivery journey were all awesome. They endured my cries and me when I was in pain. They helped me breathe, encouraging me constantly and also provided me with everything trying to make me feel comfortable. The doctor was in there by now and she said I was less than a half-centimeter away from being fully dilated. That means I had to start pushing

Unlike my first time, I was very tired and too exhausted to push. I would fall asleep in the middle of all the pushing. My husband kept waking me up, telling me the baby was almost there. The fact that he was in the room with me this time alleviated the mental pressure on me. Of course, I was still the one doing all the work. Everything around me was woozy and I felt so groggy. The fact that he was there to help me push our baby out helped me keep the dizziness from inculcating fear or loneliness in me. 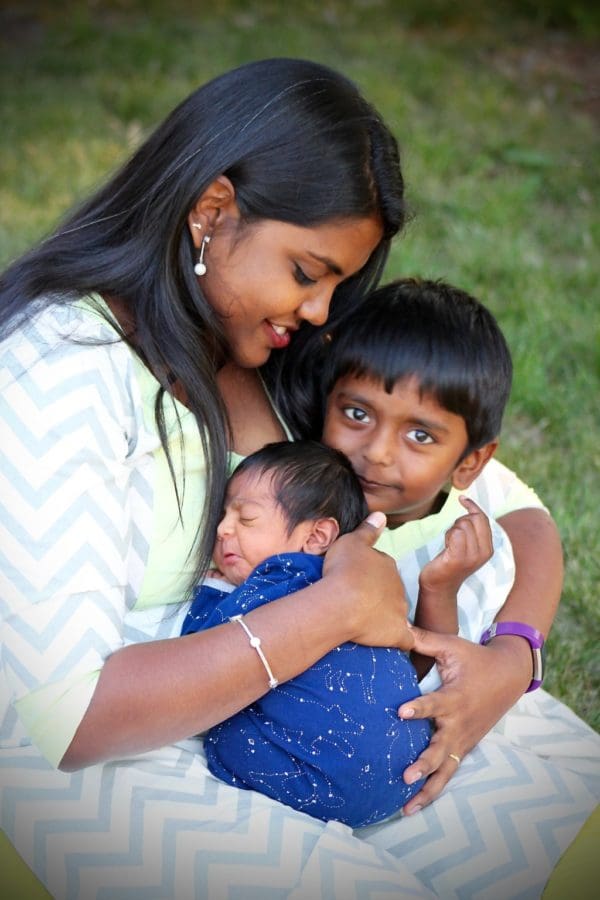 Finally, Nevin was born at 8:15 pm. My husband cut the cord as I went back to sleep for a bit. The nurses brought the baby to me and laid him on me. That little guy was crawling on me, his shrieks almost stopped as his bare skin touched mine. All through my pregnancy, I kept wondering if I would be able to love my second boy like the first. The moment when that tiny little person latched on to me stopping his cries I realized I totally could.

Oh yeah! Jivin met his brother that night before sleeping on the hospital room couch with my husband. I, on the other hand, got up by myself later that night to find my hospital bag and started to sort my stuff.

Though my pregnancies and labor journeys were very different from each other, I wouldn’t change a thing about them. While one boy’s birth made me realize how strong I was, the other made me confident and daring.