Tomorrow we won’t fight with him.

My husband whispered those words to me as he came into our son’s bedroom. I was sitting in the rocking chair next to his bed watching him sleep. I sighed. I had just been having the same internal dialogue in my head.

Tomorrow will be a better day.

Tomorrow I will yell at him less.

Tomorrow I will be more patient.

Tomorrow I will play with him more.

Tomorrow I will laugh with him.

Tomorrow I will do everything I can to make sure he knows how much we adore and cherish him.

Tomorrow offers hope. A clean slate. Another chance to be the kind of mom I want to so badly be.

Tonight my heart is heavy. It’s sad, beat up and full of regret. Lately I feel like every day I’m fighting battles. All. Day. Long.

Having a persistent, determined two and a half year old is hard. As charming and funny as they can be, they can also be downright maddening. Enter a mama who gets easily frustrated and well, things can get ugly. We are both stubborn, prideful and too much alike. We both like to be in control. The thing is, he is TWO and his behavior is to be expected. I, on the other hand, am a 30-year old mama who should know better. I should know to remain calm, laugh it off and move on. I don’t want to spend these precious days fighting battles against him. I don’t want to feel battered, bruised and defeated after a long day of fighting. If I’m being honest, fighting is taking its toll. It is stealing the joy of motherhood. It is causing a strain on my relationship with my toddler. I adore him to death, he is my everything- but- I’m exhausted. It is breaking my heart.

As I watch him sleep it dawns on me. I’m not sure that doing better means fighting less. The reality is that motherhood is always going to be filled with battles. It’s part of the job. Our job isn’t to keep the peace at whatever cost. It is to fight at all costs. The fight we are fighting is to raise our children. Children who are decent, responsible, loving, kind, respectful, honest. Children who can hold their own and succeed in this world. Each battle is a small victory as we progress through motherhood. I’m not fighting against him. I am fighting with him. I am fighting for him. This doesn’t mean I can’t change the way I fight. I CAN do a better job at staying calm during the battles. I can choose my battles more wisely, be more discreet. I can teach him to fight battles respectfully. I can fight for him in a way that doesn’t keep hurting our relationship. 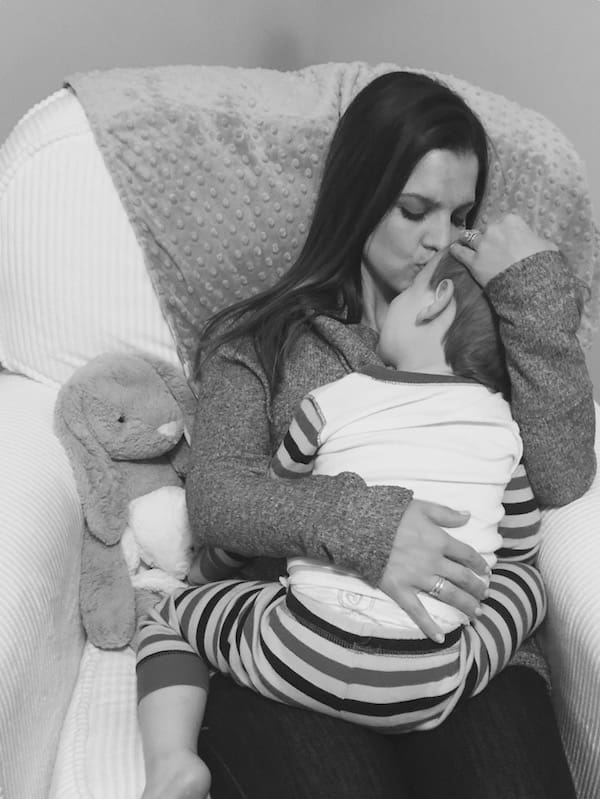 So while I can’t say I’m waving that white flag- I am going to change course. I’ll keep fighting the fights that are necessary for his well being. I’ll keep fighting for him to be his own self. But I’m also going to be more calm and let go of the frustration. I’m going to slow down and enjoy the ride. I am going to embrace having a little mini clone of myself and show him how I can keep my emotions in check.

Tomorrow I will keep my cool when he asks for milk and refuses the yellow Mickey Mouse cup because he wanted the blue Mickey cup. I’ll sip my coffee as I talk to him calmly about using “thanks” and “please.”

Tomorrow I won’t get frustrated when he refuses breakfast only to say “I’m hungry” ten minutes later. I’ll gently remind him that we have to eat at scheduled times and that he can have a banana in the car.

Tomorrow I will laugh at his persistence to wear his Jake and the Neverland Pirates pajama shirt to daycare. I’ll be silly with him and tease him as I discreetly dress him in a different shirt of his choosing.

Tomorrow I will be patient and let him walk to the car as slowly as he’d like. I’ll let him climb into his car seat by himself while telling him, you are so independent!

Tomorrow when he asks me to play with him while I’m making dinner, I’ll say just a minute. I’ll talk to him about waiting our turn while I get down on the floor and build Legos and do puzzles together.

Tomorrow I will say yes to his relentless requests to play swords. I am coming to realize that he needs me to play with him in order to avoid meltdowns.

Tomorrow I will be silly with him, make a mess and not care. I’ll be better at relaxing, other things can wait.

Tomorrow I’ll snuggle with him in his bed, holding him in my arms, feeling his breath on my face, his body melting into mine. I know he will feel safe and loved.

Tomorrow I will be at peace looking at him knowing that there is no where else I would rather be.

Tomorrow there is no other battle that I would rather be fighting.

Tomorrow I won’t be perfect, but I will do better.