I have a confession to make; one that I never thought I would need to fess up to…at least not until I reached the age of 75 or something like that. I’m in the ninth month of pregnancy. Everything’s getting ready to loosen up and since I’ve had two vaginal deliveries things aren’t, er, as tight as they once were. Now is the perfect time to catch that cold that all of my children and my friends’ kids have been getting, right? Of course it is…

Everything started on a Monday; the sore throat and dry, unproductive cough. I started using more Thieves Oil in an effort to keep things at bay and get over this thing quickly. Much to my chagrin, it just wasn’t happening and by Tuesday evening, I had lost my voice. Wednesday was by far the worst day and it was mostly because I had been up the night before hacking up a lung trying to get rid of the gunk residing in my chest. I finally resorted to sleeping in the reclining chair in our living room because I was afraid of the damage my unsuccessful hacking would have on my exhausted accountant hubby.

I have to be honest though…aside from the coughing, sleeping with cough drops in my mouth and sounding like I was a chain smoker, the most annoying part of this cold was the mere fact that I literally peed my pants with every cough.  I could have just gone to the bathroom, emptying out everything  that I thought was being held in my bladder but nope, the cough sets in and I have to change clothes again. I went through an entire wardrobe of pants and underwear in four days because of this blasted cold and that, my friend, is what had me all fired up. I actually just started getting up in the middle of the night, going to the bathroom and then sitting on the toilet while my body did its routine coughing bit. All the while, listening to the remaining squirts of urine that clearly hadn’t escaped even though I had just peed ten seconds ago.

Crabby. I was irritated with myself, with my body that was not cooperating with me, and even though I can laugh at most things, the knowledge that I could be out and about in public and at any moment have a coughing fit that would result in me smelling of ammonia was just too much!

I tried menstrual pads (and thank goodness I still had some laying around from the last time I was pregnant in 2011). I’m really not a huge fan of them so I had a lighter absorbency pad and it kind of did the trick. Then I ran out of those and had to rely on panty liners. Those were worthless. Imagine it: your underwear completely lined on the inside with panty liners. Whew! It was uncomfortable and quite the chore to replace every time I needed a clean lining. Plus, despite the pad and liners best efforts, I still smelled like urine.

As they say, desperate times call for desperate measures. After getting up at 6am to wash clothes and underwear because I had nothing left to wear, I announced to my husband that I would be purchasing whatever was there to help me with my pee problems. So into Target we went… 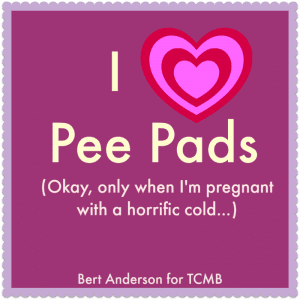 I walked to the correct aisle and looked around at the packages of urinary incontinence products. I kept looking around to see if any of my neighbors or the moms from preschool happened to be walking by. I mean, I could always say that I was buying them for my grandma, right? They aren’t alive any more, but it’s not like an acquaintance would know that if they saw me with a huge package of Depends clutched in my arms.

Looking through my options I was pleased to find that I didn’t have to buy what I envisioned was the adult version of a diaper. (Although, I will admit that I was tempted to try out one of my daughter’s diapers earlier that week in an act of desperation.) They offered pads; like the kind that I had used before, but similar to a pad you would use for your period – they had absorbency variations. I looked through the options: light absorbency (no, that would be like the panty liner disaster), moderate (could be the one) or heavy (now, I was peeing a little bit, but not emptying my bladder into my pants). I went with the moderate because it seemed less embarrassing to use than the heavy.

The check out was fine and I pretended to not notice the bright pink packaging for my urinary incontinence pads as it was scanned and placed in a bag. Gosh, it was like the first time I bought tampons as a teenager. I was so embarrassed that I walked the check out lines looking specifically for an older woman cashier who probably was a mom and wouldn’t judge me for my purchase. Silliness! 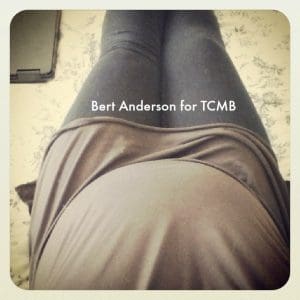 I got home and eagerly ran to the bathroom to try out my pee pad. (That’s what my hubby and I have been calling them.) Let me tell you…it’s been love at first try. No more soaked clothes and no more ammonia-hinted smells following me around. I’ve been able to rest easy and it’s all because I let go of my own pride and bought a product meant to aid me with this little pregnancy issue. I’ve been telling everyone about it because I’m just so relieved to not be visibly peeing my pants any more! So, lighten up a little bit, don’t take yourself too seriously and if need be, buy a urinary incontinence pad if you’re hugely pregnant and have a cold. It’s been the best decision this pregnant mama’s made in 2014!