I pulled my phone out of the pocket of my leggings to check the time during open gym last Friday. 10:45. How could we possibly still have thirty minutes left before we had to leave to pick up the twins from preschool? My three-year-old and I had arrived to open gym later than usual (because we had to make a Target run, obviously) and to have thirty whole more minutes just didn’t seem possible.

This was also the second Friday of the week. I mean, it obviously wasn’t, but it sure felt that way. I had been convinced all day on Wednesday that it was actually Friday. Every time I remembered it was really only Wednesday it felt like a fresh insult all over again. How dare you, Wednesday? Why did we still have two more entire days until it was Friday?

You might ask what was up with last week. I’m asking myself the same thing. There were no blizzards, storms, or other inclement weather. No one was sick. Our car didn’t break down and the washing machine and dishwasher were both fully functioning. In fact, last week, it was pretty nice out. We played outside at a few different parks. The sun was shining. My preschoolers had only one day of school instead of their normal three, but that really didn’t seem to throw a wrench in our plans all that much.

It was a pretty normal week. A week of being hard in all the ordinary ways.

Many of my friends lately seem to feel stuck in this season of life. This overwhelming, exhausting one. Whether we work inside the home, outside the home, from home, or are rocking newborns at all hours around our whole entire home, it’s a season of overwhelm.

Last fall, in a single week – really only a span of a few days – I had five separate friends reach out to me. They were struggling, parenting was hard, and they each individually felt like they might lose it. None of these women had anything truly dramatic happen; no one had a house full of illness, a brand-new baby, or a basement flood. We all had toddlers and preschoolers and a few had older kids. It was just the ordinary hard of everyday life. 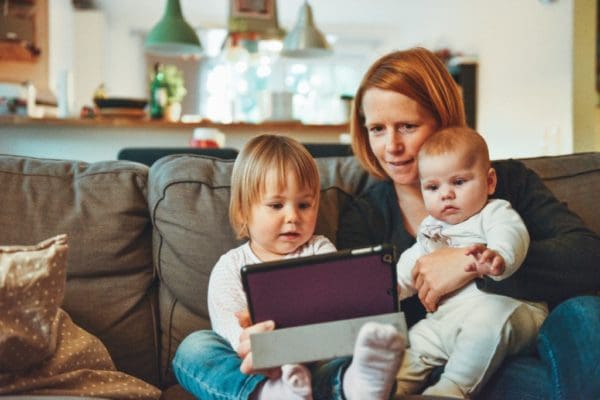 “I think we’re just in that season,” I wrote back to them, “I don’t think there’s any way out but through.”

I myself had reached out last fall to a group of friends when I felt like I was at my very last straw of parenting. Three kids who at that time were between the ages of 2-4 all under one roof with all that goes in the day in and day out of mothering is enough to drive anyone half-crazy (or maybe even certifiably insane).

My friends rallied, as they do, as I knew they would. It is hard, I’ll be praying for you, they said. I’m right there with you. Sending you love. You’re not alone. It is. So. Hard. Cheering you on! I feel emptied at the end of the day, too. It’s not silly. Being a mother is hard.

We’re just in that season.

The rallying cries of “me too” in motherhood are one of the most fortifying things I know. (Along with sweetened iced coffee, a professional pedicure, and reading a book in a silent house.) To hear that I’m not the only one who feels like they’re losing their mind because my preschooler asked me to do a puzzle with them (but I’m not allowed to actually put any pieces together), or because they asked me for a snack 38 times even after I’ve said no because it’s almost dinnertime, or when they scream at each other instead of using their words to solve a problem which I’ve literally been talking about for years now.

The ordinary hard is in the packing of lunches nearly every day since September.

It’s in the sweeping of the floor once or twice or five times a day. (Or a week. Whatever.)

It’s biting our tongues and checking our anger when the toddler Just. Won’t. Lay. Down. For. A. Freaking. Nap.

It’s changing a diaper along with an entire outfit when the baby has a blowout. Immediately after you gave them a bath from the previous one.

It’s sitting down for what feels like the first time today only to hear little feet pitter-pattering out of bed.

It’s when we can’t join our friends in conversation at the playdate because our toddler is the one who has gone certifiably insane over the color cup you brought and we have to calm them down so they don’t hurt anyone.

It’s the time we have to walk the baby around the restaurant instead of enjoying a glass of wine and adult conversation at the family birthday party because baby only wants her mama.

It’s all the times we pick up the LEGOs, shove all the MagnaTiles back into the bin, hang up jackets, put plates in the dishwasher, and throw laundry in the hamper, even though in theory our children are supposed to be doing these household chores.

We’re all out there doing this hard, holy work, sharing in this collective experience called motherhood. Even if we check the time one (read: eight) too many times during open gym time just waiting for those numbers to move so we can move on with our day. We’re all fighting our way through this season, and these long but very ordinary hard days.