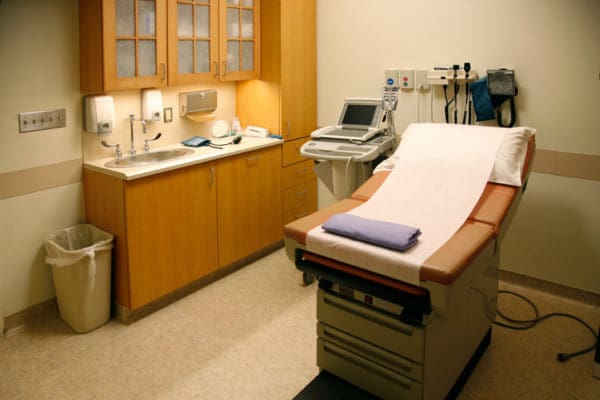 Never heard of Twin to Twin Transfusion Syndrome (TTTS)? Neither had I until about five years ago. TTTS is an unpredictable disease that few women even know about. This serious condition occurs when identical twins share a single placenta, which contains blood vessels connecting the twins’ bloodstreams. If the blood flow becomes unbalanced between the twins, it results in one twin not getting enough blood and the other becoming overloaded with too much blood. It affects over 6,000 babies a year, even more than SIDS, and the loss rate, if left untreated, has about a 80 percent fatality rate. With this, time is of the essence because the disease can move very quickly. Outside of detecting this on an ultrasound, the only physical symptom a mother may experience is sudden increase in abdominal size. I should note that TTTS can happen on very rare occasions with fraternal twins, when the two placentas fuse very early on in pregnancy.

Some backstory. A little over five years ago and three months into our marriage, my husband and I found out we were pregnant. Just as the initial shock and excitement started to simmer down, we lost that sweet one at seven weeks. A few weeks later, my cycle still hadn’t returned after my miscarriage. I didn’t read too much into it as I didn’t know how long my body would take to ‘get back to it’s normal cycle.’ I soon found myself taking another pregnancy test. Positive. This time it didn’t come as quite a shock.

Soon after, I started the same set of first appointments at my midwife’s office. The first time we actually got to see her and hear the heartbeat, I remember saying to her, “Are you sure there isn’t more than one in there!?” She looked at me puzzled and replied, “Why, do twins run in your family?” They did not, but my social awkwardness seemed to be shining through.

Fast forward six or so weeks and we had our first ultrasound. The ultrasound tech went over my history and asked if we had done any fertility treatments for this pregnancy. She was quick to also ask if there was any history of twins in our family. Looks like my random inkling was right, when the tech officially told us that we were expecting TWINS. After the initial shock wore off, I remember feeling so lucky, blessed and excited. We and everyone we told, were initially speechless and could not believe it either! The next steps were to switch over to the OB side of the clinic since the babies and I would be considered more high risk.

Twin Cities Moms Blog’s Neighborhood and Community groups didn’t exist back then to ask for references and suggestions, so I browsed the clinic’s website for physicians and based my decision solely off of where the physician went to college. Ha! (And that decision would be a God-send to me in the next few weeks, months and even years.)

The next week (13.5 weeks along) we had a more extensive and detailed ultrasound in which we found out more specifics of the twins. We found out that they were identical.

Identical (spontaneous or monozygotic) meaning:
• There was only one fertilized egg that splits and develops into two
• 2 babies, with the exact same genetic information
• Will be the same gender
• Babies can either share same sac in utero (in some cases each have their own sac), but share the same (only one) placenta
• 3 in 1,000 pregnancies will be identical twins
• Does not run in the family, like fraternal twins tends to
• Basically miraculous 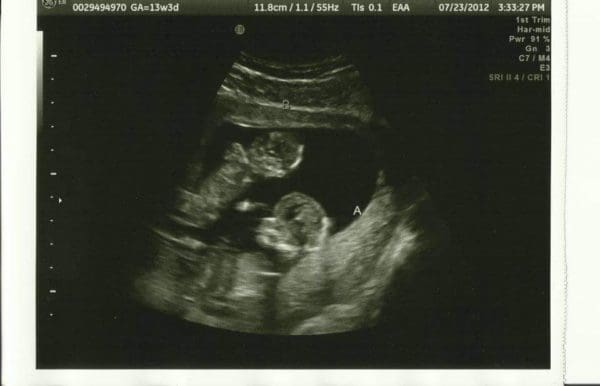 After a good ultrasound report and information overload by the OB, we were told that we would need some extra monitoring to watch for signs of Twin to Twin Transfusion Syndrome since they were identical and shared the same placenta. Therefore the blood flow and sharing between the babies needed to be monitored at least every two weeks. The Maternal Fetal Medicine specialist didn’t make a big deal of this likelihood or the statistics (which is 10% of identical cases), but that if it were something they were to notice, medical intervention would be needed right away. The only intervention that the doctor vaguely mentioned was another high risk specialty clinic in the Midwest, where these kinds of cases were referred to, that would basically laser the placenta in half to avoid any further unequal sharing between babies (Fetoscopic laser ablation).

We went into the high risk clinic again at 16.5 weeks for another detailed ultrasound. We were also looking forward to finding out the sex of the babies at this appointment too. Now as I mentioned earlier, the doctor wanted to see us about every two weeks, and while we strived to stick to that recommended schedule, between mine and my husband’s work schedules (because we agreed that we both wanted him at all the ultrasounds if at all possible) and the clinic’s availability to see us, that two week suggestion stretched into three.

What started as any ole day to us would turn into anything but. The ultrasound started and I immediately, I mean immediately knew that something was wrong. The images I was staring at on the TV right in front of me seemed gloomy, cloudy and still, compared to what we had seen the appointments prior. The tech just looked at me and said those dreaded words, “I am so sorry…..” I’m not sure if or what she said after that. I remember crying so hard, not wanting to even open my eyes cause I could barely see anything in the room. My world seemed to come to a screeching halt. The tech left the room for a while to let my husband and I have a moment together. She returned with the clinic’s RN and soon after the Specialist.

She handed us pamphlets and tissues, then asked me to lay back down on the table so she could finish gathering images and measures to help seek some answers. I honestly just wanted to scream and run out of the building. We then had to go to the regular OB office and ended up waiting for what seemed like forever in the waiting room to be squeezed into an OB schedule so we can talk about the next steps while in disbelief, shock and non-stop crying. We discussed the options, and while there really was only one, we moved forward with wanting to go home, call our parents and talk through what we needed to do. When my husband went to call his parents, his dad answered and the emotions and tears really came through then, for both of us. I had never seen him cry, ever. Granted, we had only been married for 8 months at this point. Even in the midst of this tragedy, I felt safe, comforted and loved by him, through his emotions and grief.

We ultimately decided to go the labor and delivery route. We went into the unit that night to get induced. My OB was on call until 7 am that next morning and I really wanted her to help walk us through this unknown. Delivering the babies was my ‘only’ option as the babies were nearly 17 weeks gestation and the risk of a D&C was just too high and complicated. The option was to let nature take its course and for my body to go into labor on its own. With the inevitable miscarriage, I knew I would not be able to function in the day to day life knowing at any moment my body would start trying to take care of things on its own.

At around 1 pm on August 15th, I delivered two quiet baby boys.

The only thing I regret or would change about that day and the situation would be to have a picture taken with my husband while holding them. My husband’s regret is that we didn’t name them. I was pretty adamant about that, because I knew that EVERY TIME I would hear their potential names called out by a stranger, or a waiter or the Target cashier with the same name, I would just cringe and shut down. I knew that I didn’t want to live like that and have little names in the back of my mind.

The dreaded time came when we officially had to say goodbye. We had decided to have them and the placenta genetically tested to see if what we had suspected had actually happened.

Essentially what led to their demise is the blood vessels from their umbilical cords that made connections on the placenta, caused unequal sharing of the blood and fluid volume between them. One of our boys acted a ‘donor’ to the ‘recipient’ twin. The recipient twin had an excessive amount of blood volume, which the unequal amounts were significant enough that led to Baby A’s demise first and soon after, and in our case, Baby B passed away 1.5 weeks later from the lack of blood flow because it was the ‘donor.’ 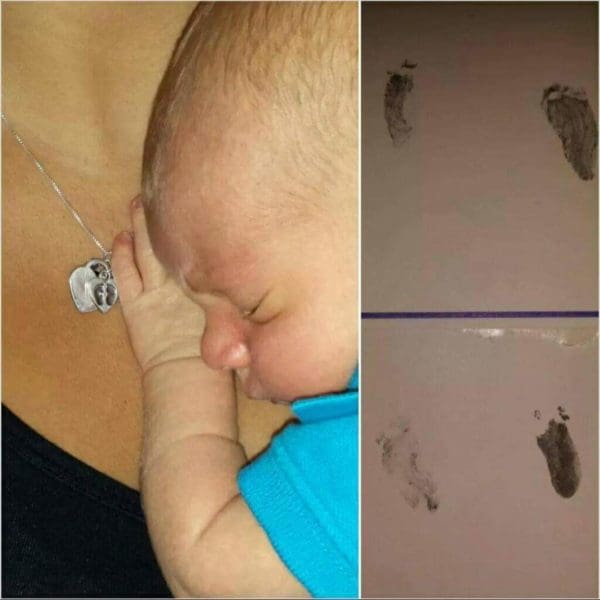 {Our next born son, holding onto the necklace my husband gave me to commemorate them that year for my birthday.}

No two cases are alike. TTTS is not hereditary or genetic. It is not caused by anything the mother or parents did or did not do. The events of a twin pregnancy that lead to TTTS happen at random. I could not save my babies. I wish with every fiber of my being I could have and things like this didn’t happen.

If there is a take away from this story and if you are pregnant with twins,
• Be proactive in your pregnancy
• Educate yourself
• Don’t be afraid to ask too many questions or be seen too often
• Don’t give up

If you successfully carried and delivered identical twins (or fraternal twins) past 30 weeks or even to ‘term,’ they are nothing short of a miracle. Hug and cuddle them for me.

I know that my story matters. My Twins and their little lives matter. I know my life would not be what it is now without going through that. I would not have three healthy full term boy pregnancies if it weren’t for their story.

Each person deals with grief in his or her own way. There is no correct way to cope. In our case, I think time really does heal, not all, but part of the wounds. Of course I still have moments of wondering what the boys would be like. What would life with them look like? Would they look like their daddy? Would they have a super outgoing personality of our next born or be super laid back like our middle son? Would they have inherited my curly hair because none of their brothers did!

Our faith, family and friends got us through this tough time; there is no doubt about that. Specifically when my aunt sent me a text message saying, ‘Cry out to God, for he too knows what it’s like to lose a child.’ She sent that at some point while we were in the hospital and while there is such a powerful truth to that, it gave me an overwhelming sense of peace while walking this tough road.

Recently I read a post by Camye, owner of Quad City Moms Blog, titled, ‘Four Things I Learned from Losing a Baby,’ that I couldn’t have said better myself.

Thank you for reading my story.