How old are your little ones? Maybe they’re not so small and you’re entering your kids’ middle years, you already know things are beginning to shift in your home. It can both provide freedom and tug at your mama heart.

It’s 8:00 at night and my seven-year-old son wanders into the room.

“Hi Mommy, what are you doing?” he asks. He’s wearing pajama shorts and no shirt, but he does have a fuzzy blue blanket wrapped around his narrow shoulders. I think it was last summer when he began to eschew sleep shirts, opting only for sleep bottoms like my husband. I usually sneak into his bedroom to check on him before I go to sleep and cover him up again with the blankets he’s tossed off.

“Oh,” Caden continued, not waiting for my reply, “You’re ordering something. It’s a book! Can I get a book? Let’s see: first name, last name, address, email, payment information…”

Because he can read now, of course. There’s no more hiding things in words from him or his twin sister, no more assuming that a combination of letters is coded in and of itself. I can no longer spell out I-C-E C-R-E-A-M over their heads to my husband. (Really, they’d pick that one up right away.)

The blanket around his bare shoulders. The 8:00 pm still-awake wandering. The reading.

The middle years are interesting, at least where we are, on the cusp of them with two seven-year-olds and a five-year-old. They’ve gained a piece of independence. They can be trusted to knock on friends’ doors in the neighborhood without supervision. The older two can be left home alone for short periods of time while I’m still somewhat nearby, like down the street at the park with their younger brother. They can make toast and pour their own bowls of cereal and grab their own snacks from the pantry. 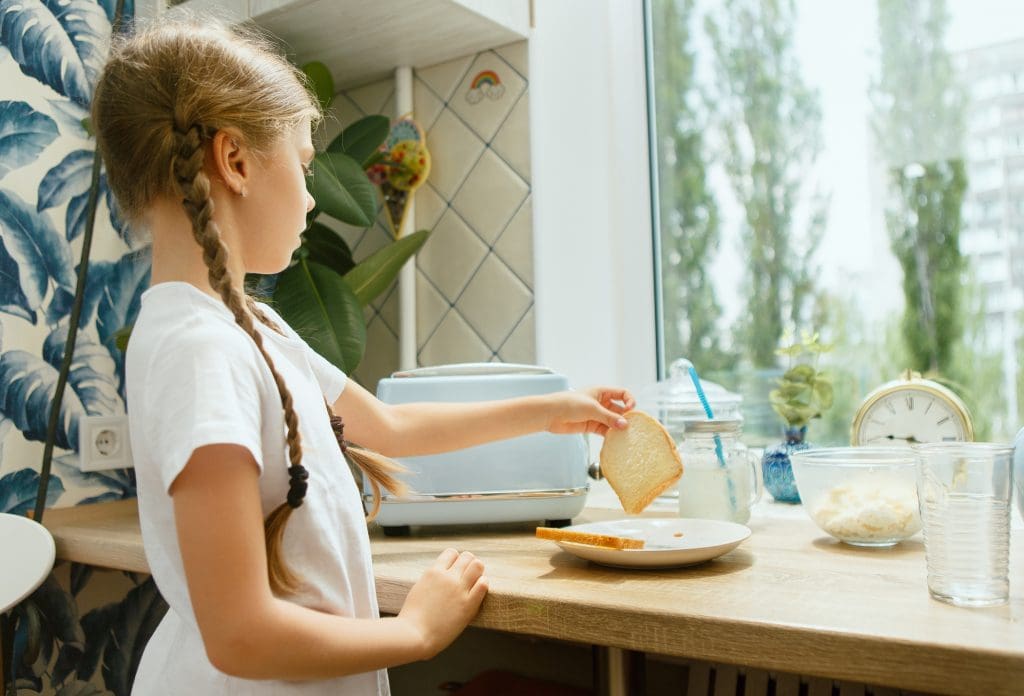 But there’s still a measure of little left in them. All three of my kids still call me “Mommy” and my husband “Daddy.” Unless I’m fine with them subsisting on the aforementioned toast, cereal, and snacks, I need to make most of their food. We tuck them in with a bedtime routine, sometimes assist with middle-of-the-night potty needs, and remind them that monsters aren’t real.

They sing along to Hamilton and Old McDonald, watch both Daniel Tiger and Ninjago, snuggle with blankets from their babyhood, need night lights in their rooms, and read through chapter books in bed. Depending on the day they might throw a tantrum as much as control their emotions or need a snuggle as much as time alone.

Their faces still hold some baby though you can see, if you flip through our family photo books, how those cheeks have leaned more than I care to admit over the years. Their legs, though somewhat scrawny even as babies, have lengthened into miniature chicken-legged stilts. My five-year-old still pronounces his “L”s as “W”s but I remember when Caden came home partway through Kindergarten, suddenly saying the hard “L”s in eleven and LEGO and yellow, how it seemed he’d lost overnight that same particular toddler-like quirk of speech. It’s only a matter of time.

I’m on the edge of that sweet spot where they still need me, but in a different way than when they were little-little. Then it was for diaper changes and buckling seat belts and dressing them—the most basic of needs. Now they need to show me the comic they’ve created, to ask where the stapler is, or help with their spelling words.

They still want to spend time with me; my music and my outfits and my hairstyle are still acceptable to them, they have yet to discover that beyond my husband’s corny dad jokes, the mere existence of their parents could be an embarrassment. But the time we spend together has evolved from meeting all of their basic needs to playing word games and talking about current events and going on long bike rides. They creep out of bed not to be sneaky but to spend time with me, to see what their parents are up to without them around.

As they hold onto these remnants from toddlerhood, those days seem like both yesterday and forever ago. It’s the constant paradox of motherhood, where you can see your kids both as the 2-year-olds they were and also as the bigger kids they actually are. We see a mouth full of perfect baby teeth in a gap-toothed smile and marvel as we trip over the 20-inch two-wheel bike where the balance bike used to be. We cover them up with a blanket in bed, a remnant of their babyhood, and wonder how it can be that their legs stick out the end when in our minds they’re still tiny football babies we need to check on in their cribs.

On this particular night, I walk Caden back to his bedroom to tuck him in. I don’t have to. He might try to linger at my desk and try to read more things on my screen and tell me 18 facts and ask 12 different questions, and if I told him I needed to work and it was 8 pm and he really needed to get back in bed, he could do that all on his own.

But I walk him back to his room and turn on the dinosaur night light next to his bed. I tuck the soft blue blanket around his half-bare body, plus another one for good measure even though I know he’ll throw it off once I leave the room. On this night I’m no longer tucking him in because I need to. It’s because I want to. Because I’m just a little bit older and wiser in this parenting journey; soon enough even this blue blanket will be too small to cover up his stilt-legs. Older and wiser enough to know that even these middle years won’t keep.