Mom disclaimer: I know there is a lot of controversy surrounding NFL football these days. Certain teams are troublemakers. Players doing unkind things. Quarterbacks making poor choices. But like many things in life, there is good to be found amongst the bad. So when we were invited recently to preview the USBank Stadium, we seized the opportunity. Lemme just say, if you want to connect with a tweenage boy, get in his world. And if his world is football, then get him to this stadium when it opens. Never before have we experienced such special, magical moments like this. So with a little help from his writer mama, here is my son’s perspective of the beautiful new USBank stadium.

I couldn’t sleep the night before we toured the new Vikings stadium. This day ranks right up there with Christmas. I mean, what do most boys love most in life? Big trucks and Sports (and their mom of course). Every time we are downtown and we drive by the stadium, I make my dad slow down so I can stare at it. Never in a billion years did I ever think I would get the opportunity to take a tour of it. 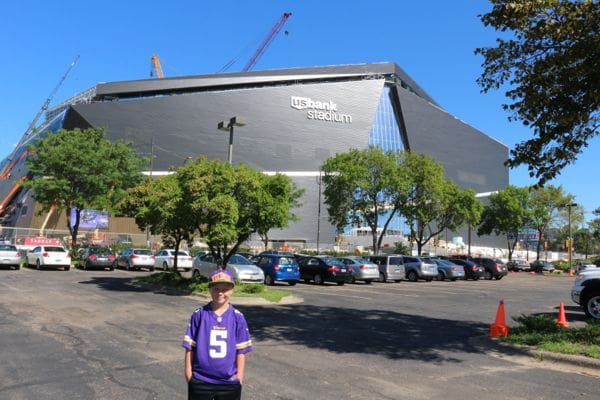 The first thing we did was visit a simulation of the stadium across the street. To get there, we walked through a mock locker room and tunnel like the players do on game days. There will be one just like this when the stadium is finished. This is where the players get pumped up about playing football before a game. 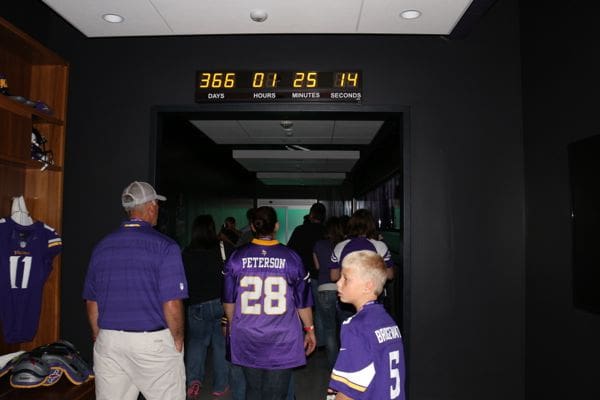 Next, we got to view a model of how the stadium fits into the Minneapolis skyline. I have to admit, the stadium seems so much bigger when you see it in person. 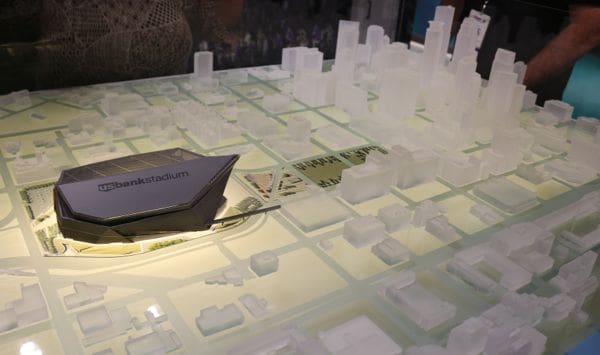 Then, we got to see a mini-design of the stadium. Guess what? There was actually a teeny, tiny TV in there and it worked! It was playing old Vikings games. I leaned over to my mom and asked her if I could have a TV in my room. She laughed, then said “no.” 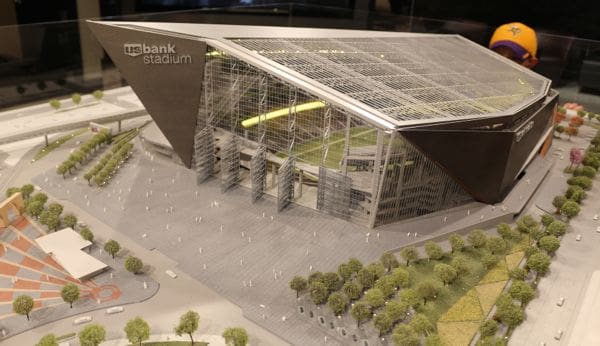 Then, we got to see what the suites will look like.  Did you know there will be suites right on the field called Turf Suites?  How cool is that? I asked my mom if we could buy one. She laughed, then said “no.” 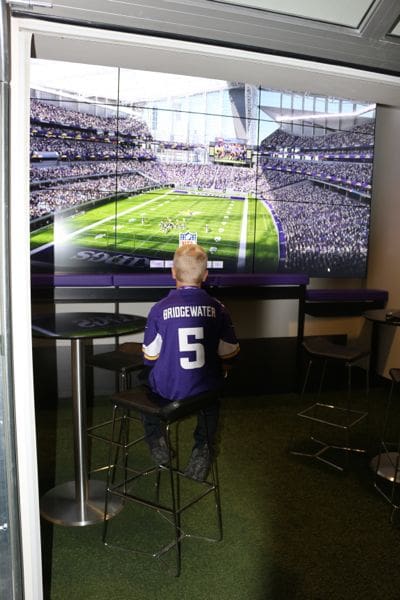 Finally we got to put on our hard hats and go inside the stadium. I felt like a real construction worker wearing a vest, safety goggles and gloves. I wonder if the Vikings players have to wear all this when they come to visit the stadium… 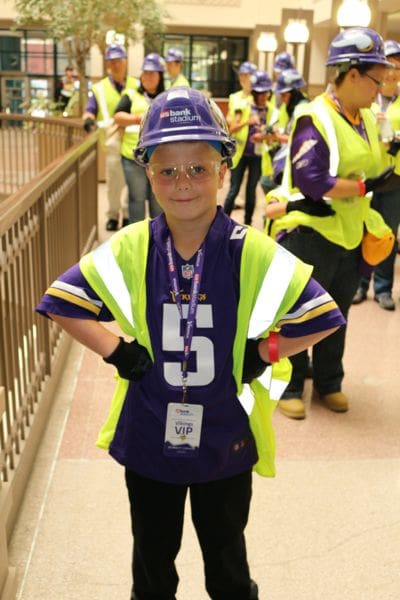 The inside of the stadium is awesome. Mind blowing. We got to walk down where the field will be. I just stood there and looked up for like 5 minutes, taking it all in. 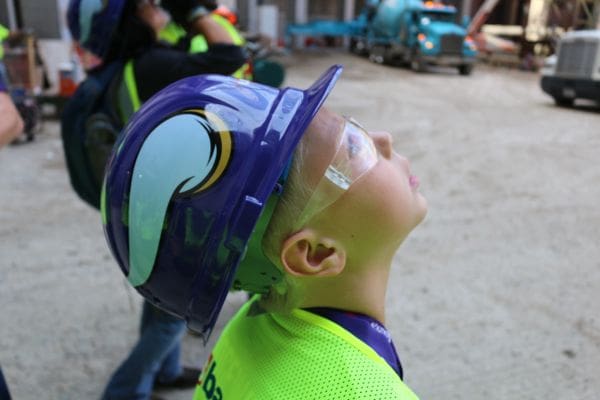 There were construction workers and trucks and cranes everywhere. This yellow crane is the 3rd tallest crane in the world! 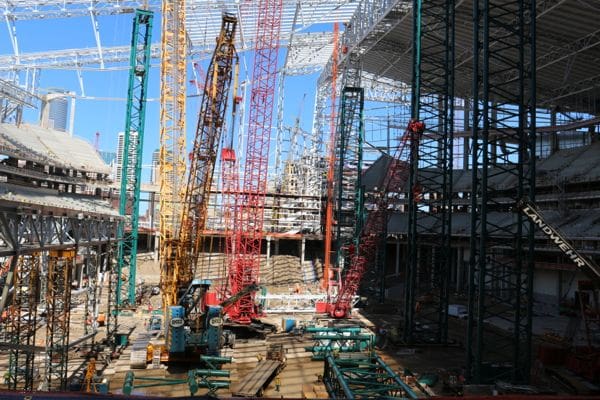 Our tour guide showed us where the jumbotron is going to be. It’s one of the largest in any NFL stadium.  Can you say JUM-BO-TRON!? 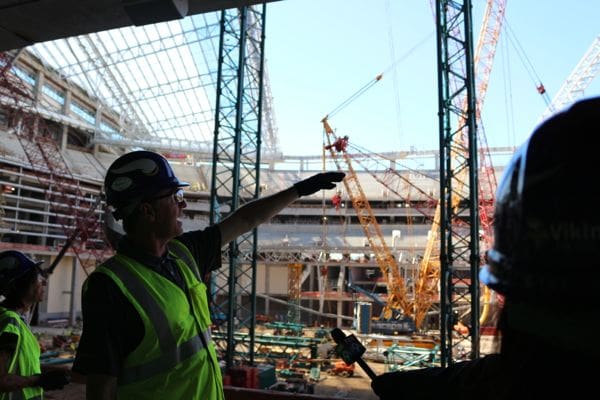 We got to see the blueprints the construction workers use every day to build the stadium correctly. They were basically like giant-sized drawings of the stadium. I wish I was better at art. 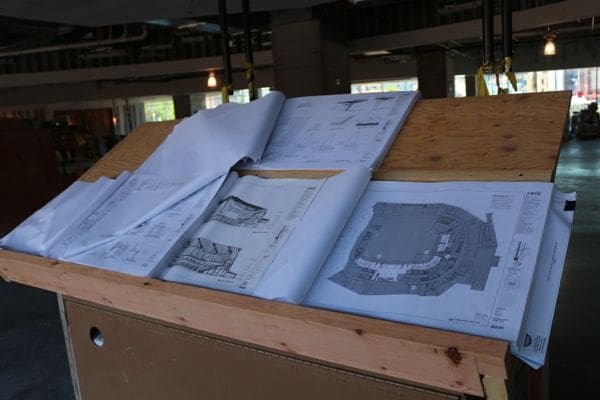 My mom likes that many of the products being used to build the stadium are from Minnesota companies. I guess that stuff is important to her. 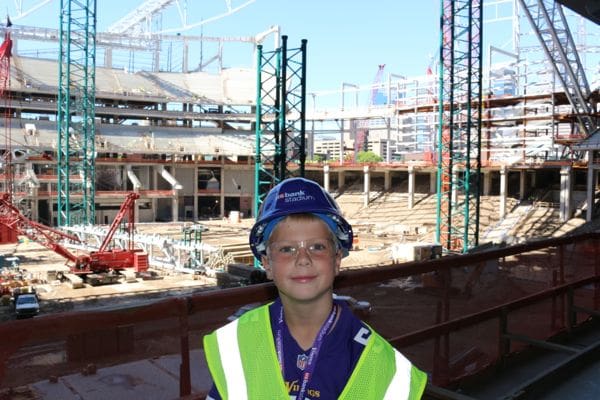 Even as the tour was ending, I kept asking important questions like, “Are there plans for a concession stand in the stadium?” He said they would be everywhere! I whispered to my mom, “Do you think there there will be mac n’ cheese available?” She laughed, then said, “Maybe.” 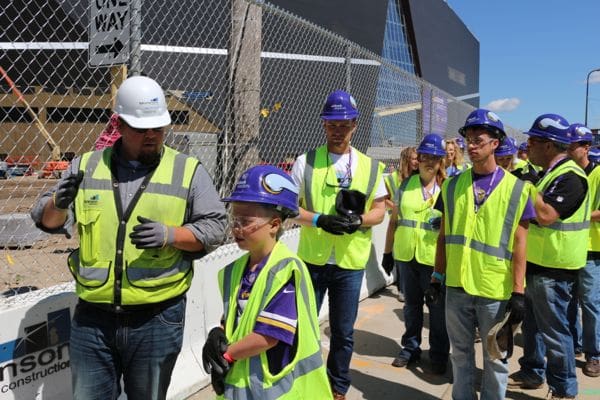 When the tour was over, I felt a sense of pride that this stadium is being built right here in the Twin Cities. I bet people will come from all over the world to see it. I really hope I can go to a game there someday, and I hope you can too. 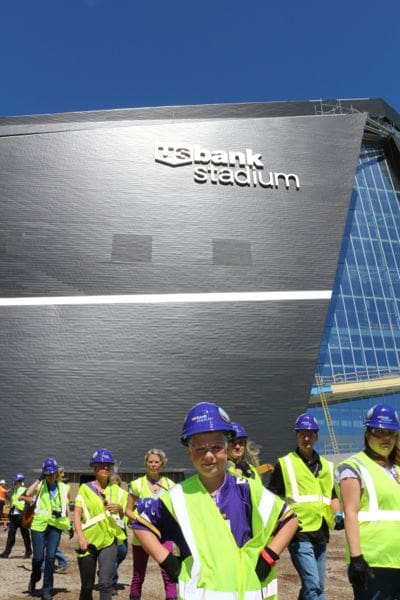 As we were leaving, I looked up at my mom and said, “It feels good to be amazed mom.” She laughed, then said, “Yes it does son, yes it does.”

{Disclosure: We are thrilled to be partnering with USBank Stadium to show off some of the fun new things to come when the new Viking’s stadium opens!  This will be such a fun new spot for families to visit together and we cannot wait to see it complete!} 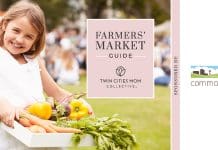 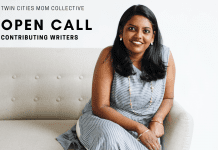 Savoring Spring With Your Kids