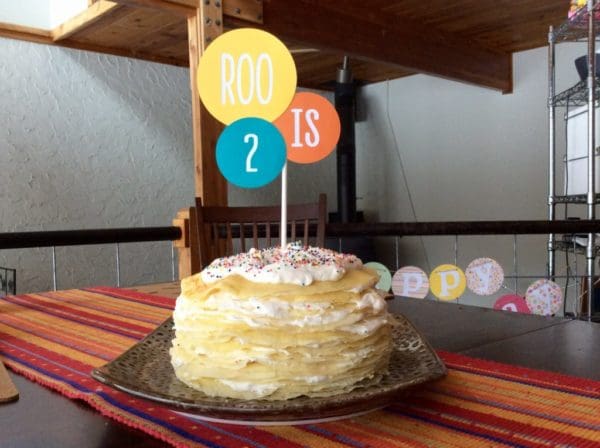 [And all I got was this stupid threenager? No seriously – this is not the time to tell me how bad three is. There’ll be time for that later. Plenty of time.]

As I think through the logistics of a third birthday cake – which is to be a race track with cars, tiny babies, tiny strollers, Tootsie Rolls and pink, purple and green sprinkles – I’m silently pumping my fist.

The Terrible Twos. The Amazing Twos. The twos. We’ve just about made it through.

On her second birthday, 17 seconds after licking the whipped cream off every inch of her Pinterest crepe cake, our precious daughter and easy baby turned into the devil.*

*At least that’s how I foggily remember it.

She’s spirited – I think that’s the PC way to say it – or strong-willed maybe. Or likely neither; just really excellent at being a toddler.

So on her third birthday as she’s slamming her face into chocolate frosting (WITH THE INSIDE WHITE VANILLA), my husband and I will be kicking back with some parent “juice.” Because we made it.

We survived potty training, and a lot of Peppa Pig underwear.

We survived a night owl phase or two, during which we put in many hours on a cactus pillow on the floor.

We survived tantrums and tooth brushing and loads of weather-inappropriate clothing.

We survived wearing our Halloween costume for five weeks straight.

We survived losing The Nap.

We survived bringing the wrong color cup to the table.

We survived each other.

And you know what?

We’re more patient, or at least we can better fake it.

We can totally tune out whining/screeching/shrieking/Word Party.

We’re dumbfounded at the growth and development of this little brain – the same brain that can both amaze us and bring us to our breaking point.

We know how important this work is.

And we know – or at least think – or are at least hopeful – that we’re doing it right.

So if you need us on Christmas, we’ll be toasting our third anniversary of parenthood, blissfully unaware of what the threes may bring.