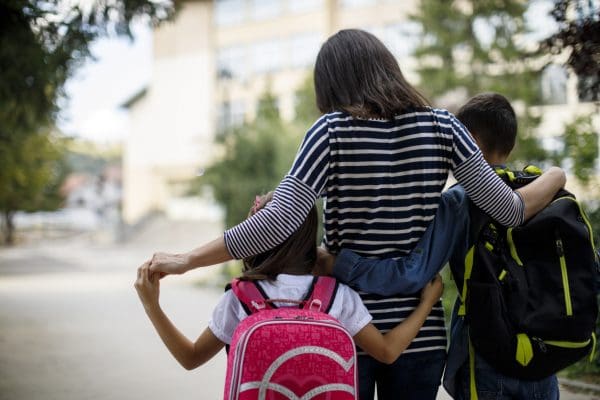 It was the end of a long day. My husband and I were having our usual debrief of the day’s happenings when all of a sudden, seemingly out of nowhere, our friendly chat turned into something a bit more edgy. Somewhere in the string of words that were said, a phrase or a tone of voice went slightly off track and as much as we tried to circle back to the original intent of a peaceful conversation, we could not evade the strange feeling. Twelve years and four kids into marriage, we are both well aware of how easily two tired parents can take offense at a careless word and turn it into something it was never meant to be. So we moved on.

Not ten minutes later, he came back and said, “I’m sorry, Babe. My tone of voice was hurtful. Can we reset?”

As I went about my tasks the next day, I found myself feeling grateful for how far we have come in our marriage communication skills. And for some reason I can’t explain, my thoughts led me to my communication with our kids. For the first time I noticed something I hadn’t seen before. It was as if a lightbulb turned on, but rather than a bright idea, it shone light on the harsh reality that I don’t apologize enough.

I’m going to be honest– my words to my kids aren’t always very nice. In fact, to be uncomfortably honest, I would never speak to another adult in the way I sometimes speak to my kids. Like every mother, my love for my kids runs very deep. But also like every mother, those kids can find ways to frustrate me more than any other human. We spend an extraordinary amount of time together, they and I, which makes them world experts at pushing my buttons. And in my less than proud moments, I react negatively. Yet I rarely apologize.

There have been many times when I have apologized after a big outburst – like when the pasta is boiling over, the baby is crying, the older kids are bouncing off the walls and I suddenly yell, “Everyone go to your rooms RIGHT NOW!” Their stunned, big eyes as they slowly back away are instant reminders that I’m the one who needs to calm down and apologize, which I do.

But more often what happens is that we’re late, or someone can’t find their flashlight (every single night), or the toilet wasn’t flushed again! And the words that come out of my mouth in reaction to these everyday scenarios are not the way I would react if anyone else in my life was late, lost their things or didn’t flush. I show way more patience, grace and respect for adults who have had a lifetime to figure these things out than for my little people who’ve only just learned to write their own name in the last couple of years.

Why? Because kids get over it so quickly. If I was intentionally rude with my husband or a friend, they would call me out or bring it up later, but my kids take what I say and three minutes later, they’re talking and joking about something else. They are resilient and will probably never bring it up again. (Until it comes out in their therapy sessions as adults!!) I have to admit I’ve been foolish in thinking that I can just move on and leave it. In the hustle of life, I have allowed myself to hurry onto the next thing as if my negative words have no impact.

When my husband apologized to me for something that really was hardly worth mentioning, I realized how nice it felt to have cleared the air and be able to feel that peace and connection between us. It made me feel noticed and valued. Now I see that I need to apply those same communication skills to my interaction with my kids. I want them to feel safe, noticed and valued. That won’t happen if I ignore my blatant mistakes or pretend no one sees them. They’re my little shadows, they see it all.

That is one of the hardest things about being a parent: having a live audience for every moment of your life – successes, as well as failures. I would venture to say that I’m not the only mom who thinks the hard days aren’t only because of the challenges that the kids present, but more because of my less-than-desirable way of meeting those challenges. At the end of the day, it’s often myself that I’m disappointed in. But somehow we all think we’re the only one who feels that way. We’re the only mom who loses her temper. The only one who has tears rolling down her face as she holds a screaming baby who will not go to sleep. The only one who can’t wait for the kids to go to bed because the noise is driving her insane.

But it’s just not true. No human who is surviving on two hours of interrupted sleep and lukewarm coffee and is being shrieked at in a foreign baby language can keep their cool for very long. We all get angry, lose our patience or feel crazy at times.

However, the goal isn’t achieving perfection, because that is not realistic. It’s about recognizing that I am a work in progress. As a mom, I want my kids to know that I know I’m not perfect, yet I’m putting in the work to smooth out my rough edges. I want to model transparency about my struggles along with responsibility to do something about them. With consideration for the level at which they would understand something, I would rather learn humility in acknowledging my faults than assume they don’t notice. That assumption would only subconsciously train them to put up walls around their weaknesses and hide part of who they are.

One of the tragedies of life is being surrounded by people pretending to be something they’re not. Have we not all sensed the alienating feeling that creates? Let’s be authentic and transparent, so that we can be people who actually connect with each other in a real way. If home is to be a safe place where we feel heard and valued, I know that this authenticity needs to start with me, and that is why I will be saying, “I am sorry,” a lot more frequently than I used to.