With Mother’s Day coming up, we’re taking this week to share stories from our own Twin Cities Moms Blog Contributors on how they became mothers. We all have unique stories, and some of our stories are still being written. We hope you enjoy reading about these moms’ experiences! 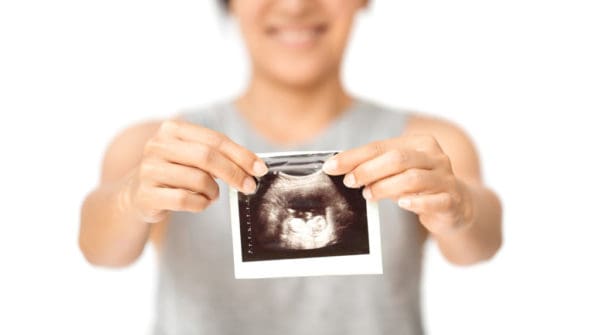 Not many moms get to see a picture of their child a mere five days after conception. And even fewer can say that the cluster of cells that would become their child were frozen for six years prior to being transferred to her uterus. Originally intended for the use of another couple, our embryo was donated to us so we could have a chance to grow our own family. The original intended parents created our embryo, along with several others in February of 2011. They had one child, a son, and decided their family was complete. That left the remaining embryos to be donated. Eventually the recipients of those embryos were my husband and me.

It’s straight up crazy tunes to us that this embryo existed for six years before we knew about her. Several months before we were married, while we planned our perfect wedding day, she was there. Before we learned of my husband’s poorly morphed sperm and my crappy eggs, there she was. And as we mourned two miscarriages and two chemical pregnancies, she was waiting for us. She was there all along, frozen in a tiny straw, with her seven other embryo siblings. For whatever reason, we just weren’t supposed to meet her until February of 2017. I’ve fought and struggled a lot these past five years. I’ve been mad at God for not giving me what I wanted when I wanted it. It’s been a lesson in patience and I’ve never been a very good student. But here our little nugget existed the whole time. I often think about that, and have found continued healing from what we’ve endured to get to where we are right now. She was meant for us all along.

We’d been down the path of transferring embryos to my uterus three times prior, and this time felt just as similar. Thankfully, though, having a few under my belt, I had perfected the exact amount of water to drink prior to showing up. My bladder was full enough where it would make the reproductive endocrinologist’s job easy to find my well lined uterus, but not so full where I was fearful of peeing right there on the table. The doctor joked that he’d yet to be peed on by a patient, but that there was a first time for everything. I wasn’t up for the challenge.

Prior to the embryologist passing the catheter with our embryo over to the doc, a smiling nurse came in with a picture. And that’s when we met our girl for the first time. The most beautiful picture we’d ever seen. 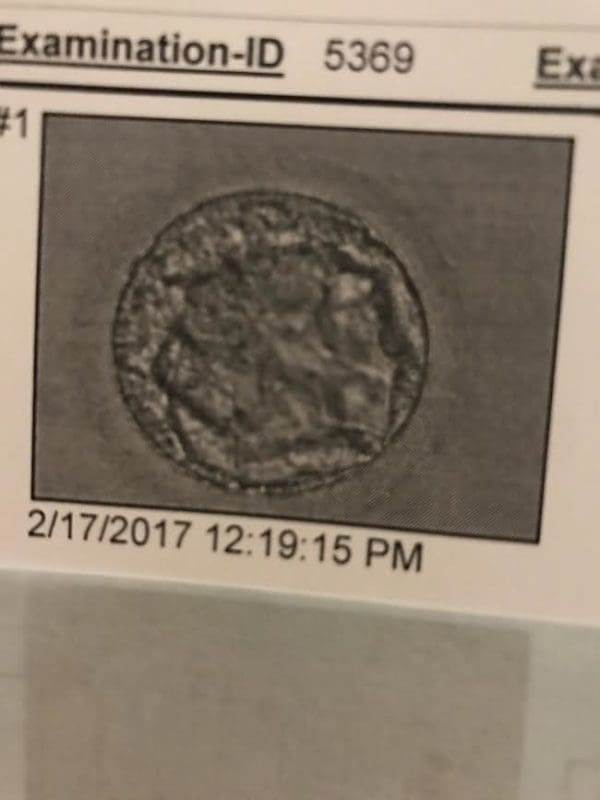 I’m of the firm belief that no matter how many times one experiences this process, it’s still so surreal to look at that image for the first time. Within those microscopic cells is the potential for life. A life so desperately desired and dreamed of. It’s incredible that science has advanced to a place where our child could be created and grown from another man and woman, frozen for six years, and transferred into my body. Science is simply amazing, isn’t it?
It’s been a few months since that embryo transfer, and we’ve now seen our little lady continue to grow and develop through various ultrasounds. I have recently been able to even detect her heartbeat on an at-home fetal Doppler. To think that she started out as a cluster of cells, and that we got to meet her via a picture at that early stage, is so incredible. It’s a moment we’ll never forget, and one we’ll cherish always.