We’ve all heard it. Too many times, probably. Maybe as soon as we pushed those babies out of our bodies or welcomed them into our homes.

They’re only little once. Enjoy it. You can clean the mess later.

When exactly is later? I wonder, as I load up the dishwasher with the things we’ll need if we want to eat breakfast, lunch, and dinner again tomorrow. In my head I picture a very literal “later”: a kitchen overcome with over a decade’s worth of dishes to tackle, after my youngest has presumably left the house. Twenty years worth of encrusted grime. Maybe we could use paper plates, but then who would take the garbage out? (Also: the environment. Not good.)

I look around the playroom after a joy-filled afternoon of play and sigh. The last thing I want to do is deal with this later. It’s a disaster. Absolutely worth it, since all three kids played together so well with everything from puzzles to their play kitchen. But still a complete and total watch-where-you-step-because-you-can’t-see-the-floor disaster. It’s not fair to expect me or my husband to clean this all up later when we didn’t make one iota of this mess. To excuse the kids from their part in this so we can “enjoy them now and clean up later” seems absolutely absurd. And exhausting. 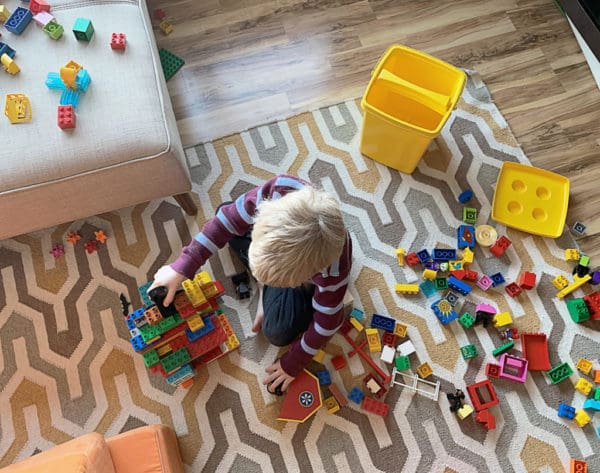 Is later after everyone is in bed at night? Because at that point I’m pretty wiped. I’ve already put in a full day and I’m ready to sit and relax, not scrub toilets and tackle a sink full of dishes. Not to mention that’s the time I use to pursue my own work and passions like writing and reading. It’s my time to recharge, both by myself and also to reconnect with my husband. “Do it all later” sounds a lot to me like put aside your own life and dreams.

Is later once everyone is in school? Because by then I will have seven and a half years worth of mess to deal with. Seven and a half years of crushed Cheerios and Goldfish in the corners and laundry and sheets to change and all the sizes of baby clothes to sort through.

Is later really once everyone has left the house? Because I can’t handle two decades of a messy home just because I have children. I have a hard time functioning amidst clutter. I understand that action figures will take over the living room, shoes will multiply like rabbits in the mudroom, and the playroom will frequently look as though three separate tornadoes have rushed through it. And that’s fine. Sometimes. But not for two straight decades.

No, enjoy now, clean it up later has never sat well with me. For one, I’m not the most playful mom. Playing with my kids all the livelong day sounds a little bit like torture, especially lately when I’m told to, “Say this.” “Okay, now say this.” Or when they tell me the very specific placement of each individual MagnaTile, and may the Lord help us all if I dare to put a single one in the wrong place. I’d much rather handle those dishes while they take turns bossing each other around.

For another, I can’t relax in a cluttered home. It’s impossible for me to truly rest or work in the evening if LEGOs are still taking over the living room floor. I function a heck of a lot better with a clear counter, laundry that’s clean and folded and put away; a mudroom where shoes are put in bins and coats are hung on hooks. It’s not fair to any of us to expect clutter to be the norm.

Most importantly, I understand that these babies are going to grow up, that they are growing up right before my very eyes. I just think it’s best if they grow up in a house where they see the dishes being done. That they hear the vacuum being run, even if it’s around the LEGO creations that I absolutely, positively, am not allowed to touch. Where they’re taught that even though it was fun to make a mess earlier, it’s time for us to clean it all up together at the end of the day. They know how to match up socks and put them away in the drawer, how to take their dishes over to the sink at the end of a meal, and how to put the Play-Doh back in the containers so it doesn’t dry out (possibly the only consequence they’re truly motivated by).

Tackling our messes as much as possible now, not later, makes the house more enjoyable for everyone. There’s another saying I’m sure we’ve all heard: if mama ain’t happy ain’t nobody happy. Well, a clean house makes this mama happy. It’s not enjoyable for me to stress about finding the paper that needs to be signed in the pile on the counter or to wash dishes, as we need them in order to make our morning oatmeal. A house that’s (mostly) clean is more enjoyable for us all; I’m less stressed out about the LEGOs scattered across the living room rug if I don’t also have a sink full of dishes and a week’s worth of laundry piled up on the couch. (Although for all our sakes it’s best if I ignore the number of LEGOs on the floor of their bedrooms. That’s a different story. One that’s best left behind a closed door.)

Forget later. I’m going to enjoy my babies and a clean house. (Well, clean-ish…) In fact, I propose a new motto, better suited to my type-A mom personality:

They’re only little once. Clean up the mess now so you can enjoy them, instead of stressing about whether everyone has clean underwear for tomorrow. 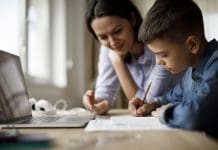 Catch Them Being Good and Tell Them Why! 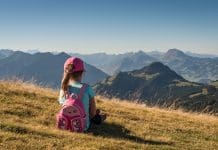