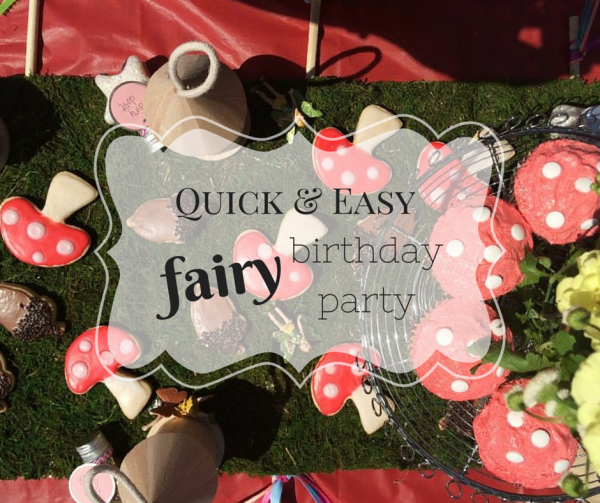 How to Throw a Quick & Easy Fairy Birthday Party:

Step 1
Pretend your child isn’t growing up so fast that you want to crawl in a hole with a glass of wine and sob, then procrastinate until two days before the birthday at hand.

Step 2
Throw it all together 48 hours before you’re to host a group of kiddos at a local park.

I’m a little hesitant to use the title I did, but am going to anyway.  This “quick & easy” fairy birthday party we had last week, was as such because it had to be.  I am the “birthday party mom.” Since my daughter, Sophia, was a baby, I’ve been spending ridiculous amounts of planning and executing fantastic parties. I’ll just put it out there – I think it’s my thing.  The place where my creative juices flow.  I love parties and I love to celebrate my kids, and from there it just snowballed.

But, this year, I could not for the life of me get motivated to plan the fairy party she’d been requesting since May.  Planning in May for an August birthday, because that is how I’ve trained them.  To plan their birthdays for months in advance. To me, that’s always been part of the fun of celebrating them, but this year in May, I was finally waking up from the newborn fog (5 months in, don’t judge) and apparently two and a half months later, still hadn’t mustered up the energy to start the party planning. A huge part of it is that “6” feels like a really big number, like we’ve really hit that big kid stage, and I just didn’t want to admit it was happening. 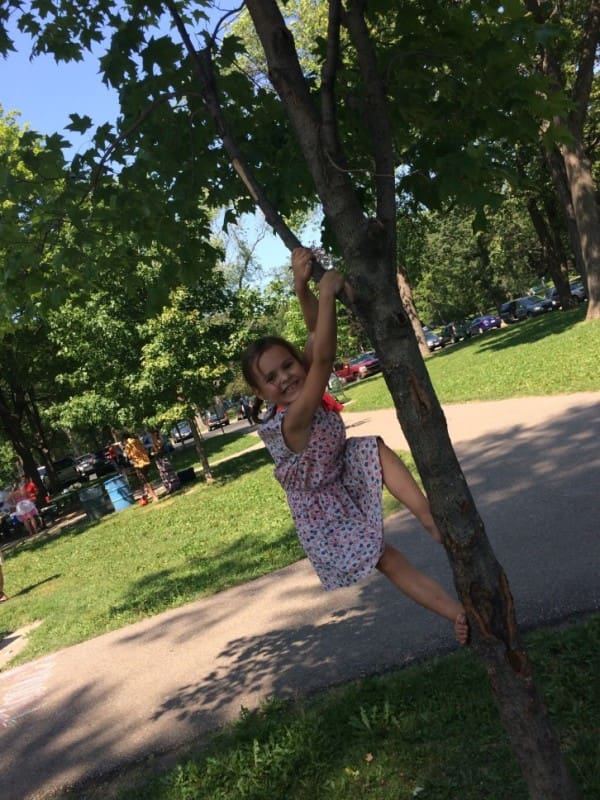 Two weeks before the party, I sent a text to the moms, asking them to save the date (read: no cute Etsy invitation).

Six days before the party, I picked a location, based off a Facebook poll for a good spot in the area.

48 hours before the party, I changed that location (it was 90+ degrees last Saturday, so we were going to need a pool/splash pad).

28 hours before the party, we finally walked into the craft store to buy anything and everything we might need to actually pull this thing off.  After an hour, with three kids in tow, we somehow walked out of that craft store happy. #Miracle 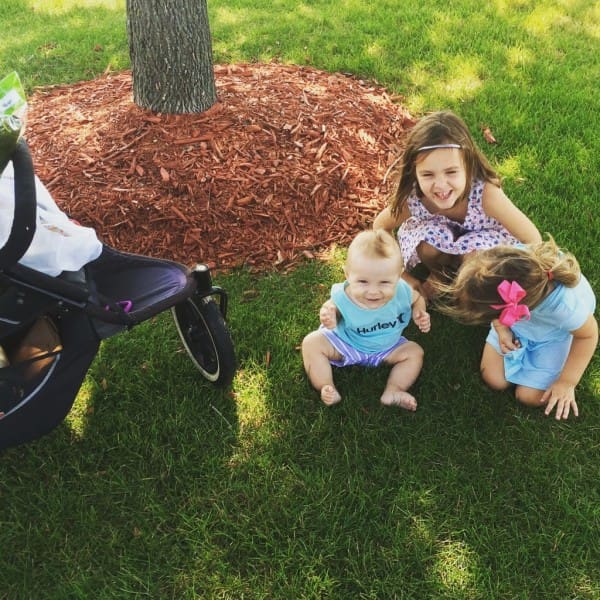 {Two out of three smiling and looking? Massive success!}

We dropped our goods in the car, ran on the grass for a few minutes, then walked two doors down to the party store.  Rather than drop a ton of money there, we bought one plastic table cloth, ordered five balloons and went home.

We could have then started actually putting things together, but that would have made sense and we were all hungry, so lunch, nap, and then the discovery that we had NO butter (??!!), which meant a trip to Target was in order.

I made cupcakes that night, baked and frosted cookies, then organized the bags for the party. In the morning, we frosted the cupcakes and turned them into toadstools. 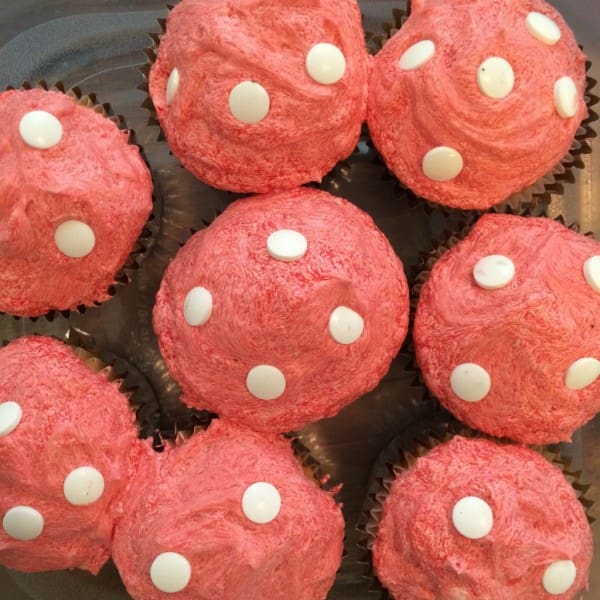 {These didn’t turn out the way I’d hoped.  And they ended up being just perfect. #winning}

At 12:00pm, we loaded up the car, grabbed the balloons on the way and headed to the park to set up for the 2pm party, which ended up being fun, successful and low stress.

I am a planner. I am Type A.  And I have my own, very specific ideas of how things should work. Usually, that means that I think things should work the way they always have.  I had spent the weeks leading up to her birthday, the weeks void of all birthday planning, feeling like a total birthday mom failure, which was not the case at all.  This ended up being the best birthday and best party experience yet, at least for me.

Considering the low amount of prep, I was actually able to enjoy my girl’s birthday. Why? Because instead of starting her big day burnt out on birthday energy, I still had a ton left to use to celebrate all that she is and will be this coming year. 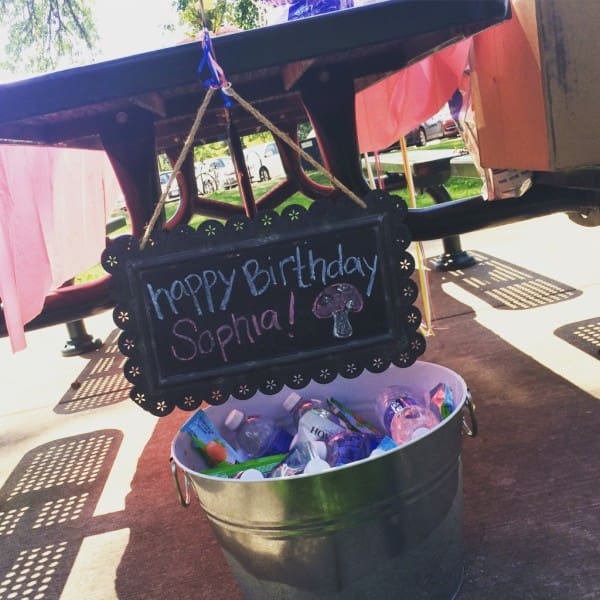 Whatever you do to celebrate your kiddos’ birthdays, please remember that in the case of birthdays, I’ve learned that words matter more than your actions.  We were talking about Sophia’s birthday for MONTHS. She felt as properly celebrated as she always has.  The only person that felt anything was different than past years was me.  And while you, of course, want to feel excited and ready to celebrate, all your kiddo wants is to feel special on their birthday. And if you do that, you get the Mom Win. 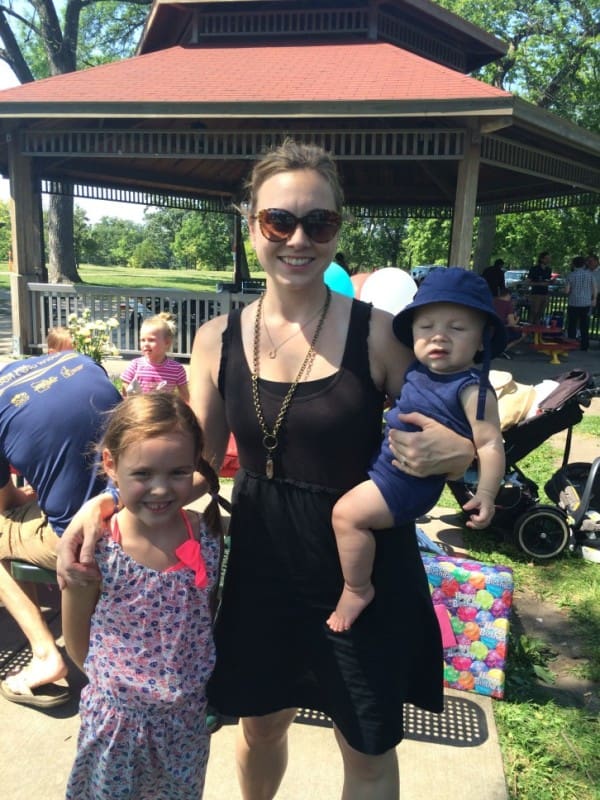 {The only reason we even have this picture is because one of my friends who was there suggested we take a picture together.  Don’t forget to get in the picture at your child’s birthday party!}

Now for the actual “how-to.”  Here’s how we did a really fast, really easy and fairly inexpensive Fairy Birthday Party.  What you need: 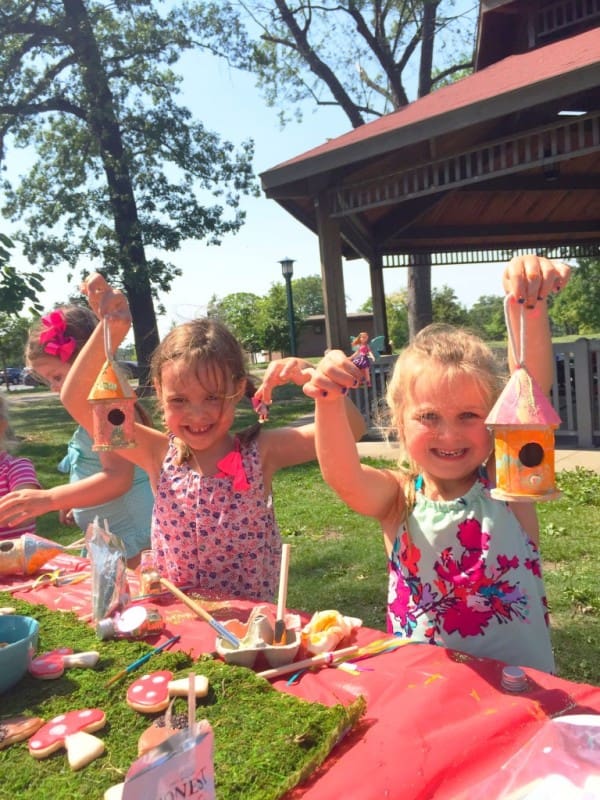 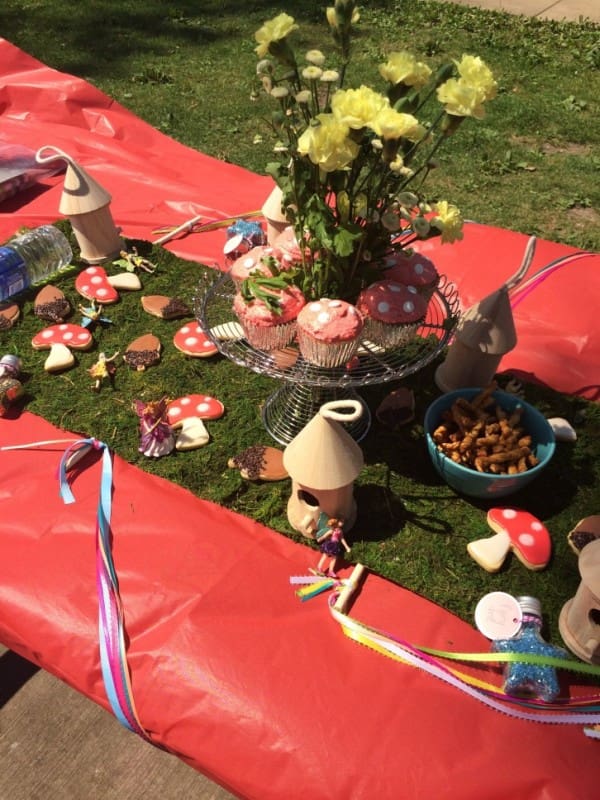 We did the project, ate the sugar, then threw them in the pool, where the chlorine washed off all of the paint and most of the glitter.  Admittedly, this party was as simple as it was because I had a lot of leftover party stuff on hand from previous years.  The sign is a chalkboard I found at Patina that I use for all kinds of occasions year round.  I have a ridiculous amount of food coloring and cookie cutters, and a bin full of craft and party supplies.  But then, you just get creative – the snacks, treats and craft supplies became the decor, and who doesn’t like elements that multi-task?

The point is, start with your imagination, spend no more than 10 minutes on Pinterest for ideas, using what you have on hand to start, and filling in the gaps with some supplies from the store.  Happy celebrating!