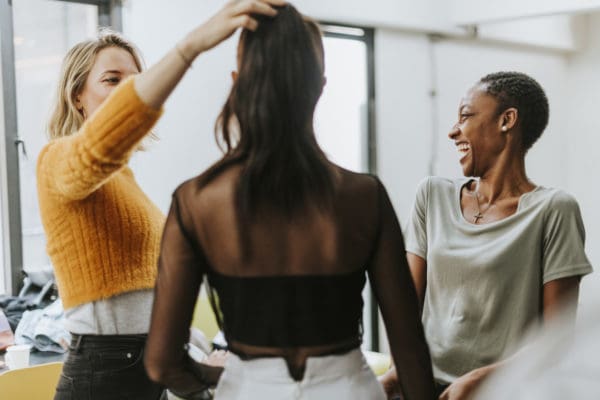 I sat down at my appointed table backstage. After a full day of work, it was time to get ready for the stage.   Surrounded by high heels, cans of hairspray, and program books, I opened up my bag. My heart sank. While I’d remembered to pack most of what I needed for that night, right down to my boar bristle teasing comb, I’d forgotten my makeup. I had some of the stuff I don’t usually wear on a daily basis, but all the most important things – like eye liner, mascara, and setting powder – all rested on my bathroom counter over an hour’s drive away.

I couldn’t help myself: I cussed loudly.

A dozen young women turned from their own makeup mirrors to find out what happened. I told them, and they sprang into action.

“I have an extra makeup sponge.” “Do you need some eyeshadow?” “I think we’re about the same color – do you want to use my highlighter?”

In the end, I waved them off and made a quick trip to the closest drug store. But the point had been made. These ladies would not let me be anything but my best, even if they had to risk a funky eye infection by sharing their eyeliner with me. They would have shared anything with me to help me feel ready, confident, and just a little sparkly.

These are the lessons I learned nearly 20 years ago when I first competed in local pageants that would eventually take me to the Miss America stage. After I held the title of Miss Minnesota, I continued to volunteer in the program in many capacities, most recently as an emcee for the pageant that happens every year in June. My emceeing duties are what brought me to that dressing room in my makeup-less state. I started in the program as a broke college student eager for a novel experience and promised scholarship money. I stayed for the people.

The people are almost exclusively women. The candidates for the titles are always women, but most of the directors and organizers, all of whom are volunteers, are also usually women. Sometimes they are former candidates or parents, but often they are simply community members who have learned the value of an organization that brings women together to serve their communities, celebrate their accomplishments, and lift each other up.

Women, especially ones in pageants, are often painted as prone to backstabbing and jealousy. I can tell you from direct experience that it’s not true. It’s as simple as offering to zip up the next woman’s dress and then gushing over how gorgeous it is. It’s as inspiring as a crew of women, all waiting for their turn on stage, standing just offstage cheering and crying as their fellow competitor shines in front of the judges. It’s as complex as letting your biggest competition fall into your arms in tears when things didn’t go well, and very earnestly telling her that you know she still did great.

Mamas, it’s this easy. We can choose to lift each other up even when the stakes are high. If these pageant titleholders can do it when thousands of much-needed scholarship dollars are on the line, we can do it, too.

Most of the time, it feels like mothers are competing against each other. It feels like we are each constantly on the offense, putting down someone else’s valid decisions on feeding, disciplining, teaching, or socializing their kids. It’s like we’re always looking for a way to make another mother feel badly about herself, because then maybe someone else won’t notice all the ways we think we’re falling short.

What if we took some cues from these hard-working young women in our midst? They know that even though they literally are in a competition – I mean, a judge is actually sitting in front of them with a scoresheet, people – they are their only competition. They are only in it to challenge themselves for growth and achievement. Criticizing, belittling, or undercutting another candidate accomplishes nothing other than revealing your own insecurity. What if we looked at other mothers the same way? How might we each bend over backwards to help other mamas get, be, and do the very best? As part of the Miss Minnesota program, there’s something called the Northern Lights Princesses. It’s a mentoring program for girls aged 5-12, allowing them to get to know the candidates, gain public speaking skills, and have some special moments onstage. Whenever my emcee duties brought me near these sweethearts, I could already see they had caught on. They fixed each other’s dress bows, complimented each other on their dancing, and held each other’s hands when they were nervous. I can’t wait for my own daughters to share these experiences.

We all do better when we all do better, mamas. Let’s make the extra effort to support each other and let’s teach our girls to do the same.

I promise, if you ever forget your makeup at home, I’ve got your back.