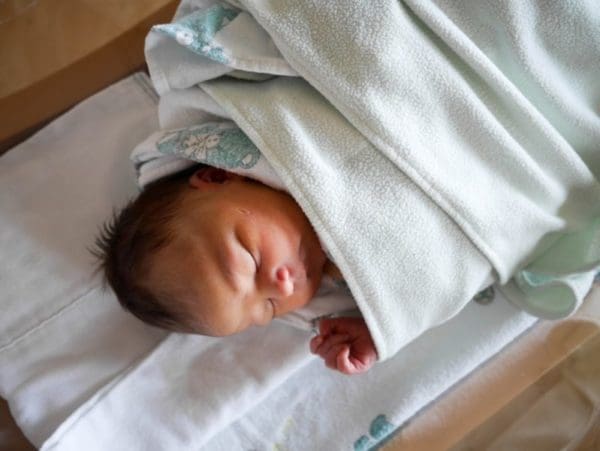 Birth stories are amazing and horrifying all at the same time. I have a love-hate relationship with them. Hearing people’s stories almost always make me terrified to have another baby. But then, somehow, they also reassure me that mamas and their babies are made to do incredible things. More often than not, everything turns out fine. So, here I am, throwing my story into the mix and hoping it can give someone the encouragement that, if I can do it, you sure can too.

I went into my pregnancy with a very specific birth plan: to have no plan outside of getting the epidural and trusting my doctor. No amount of reading or classes can prepare you for something like this. It is something that women have been doing since the beginning of time, but that looks a little bit different for every single one of us.

I read through most of the Mayo Clinic’s Guide to a Healthy Pregnancy and followed along as my baby grew from a walnut to a pumpkin on my tracking app, but that was about it. Having someone walk me through the stages of labor and delivery or breathing and relaxation techniques was totally not up my alley. I did take the hospital tour though (highly recommend knowing where you’re going) and ended up getting acquainted with the hospital on a number of occasions throughout my pregnancy due to random bleeding and a four-week long viral illness where I could hardly get out of bed.

Throughout all of the scares and my irrational fears (that probably stemmed from watching too much Grey’s Anatomy), my philosophy remained simple – every pregnancy and delivery is different. You cannot expect it to go according to plan. I knew that following my doctor’s and nurses’ directions and rolling with the punches would have to be enough.

I was due on July 26. For most of my pregnancy, I had a feeling that I was going to go early. The week leading up to July 18, I was pretty certain that my water had been leaking. Remembering all the stories of women getting sent home after false alarms, I wasn’t sure if I should go in. I decided to wait. It was a busy week and I had stuff I needed to get done before our baby joined us. I was busy organizing an annual golf tournament that was scheduled for July 19.

Something kept telling me to make sure the pieces were in place for other people to run the show – I wasn’t going to make it this year. The night of the 17th, I told my husband he needed to stay home from work the next day. I was convinced my water was leaking (I swore I wasn’t just peeing my pants!) and just had that crazy feeling that the next day was THE day. He obliged, thank goodness!

The morning of the 18th, I landed a work project and again, knew I needed to get some ideas down immediately because the baby was coming. I took a break from my work and went to the kitchen to make lunch. Standing at the island, it happened. My water finally fully broke. Since it had probably been leaking all week, it wasn’t the waterfall you sometimes hear about, but it was at least enough to know for sure that this was it. I had my “whoa, this is really happening moment” but wasn’t having contractions so quickly calmed down.

After a quick change of clothes, I was back to making our lunch because food is life. I knew I wouldn’t be allowed to eat once I got to the hospital so the foodie in me wanted to make sure I loaded up now like a bear getting ready to hibernate. We ate, connected with people about the golf tourney, grabbed our bags and left for the hospital. It was all weirdly chill.

It was around 1pm when we arrived at the hospital. They did their standard “did her water really break” test and confirmed that indeed it had. Once settled into the delivery room, strong contractions still hadn’t started. The nurse suggested that I go do some lunge laps around the birthing center. I rocked my hospital gown, robe, and slippers and did deep lunges all around those quiet halls. Holy moly did that work like a charm! Contractions came on pretty strong and I snuggled back into the bed, quietly contemplating how early was too early to get the epidural. 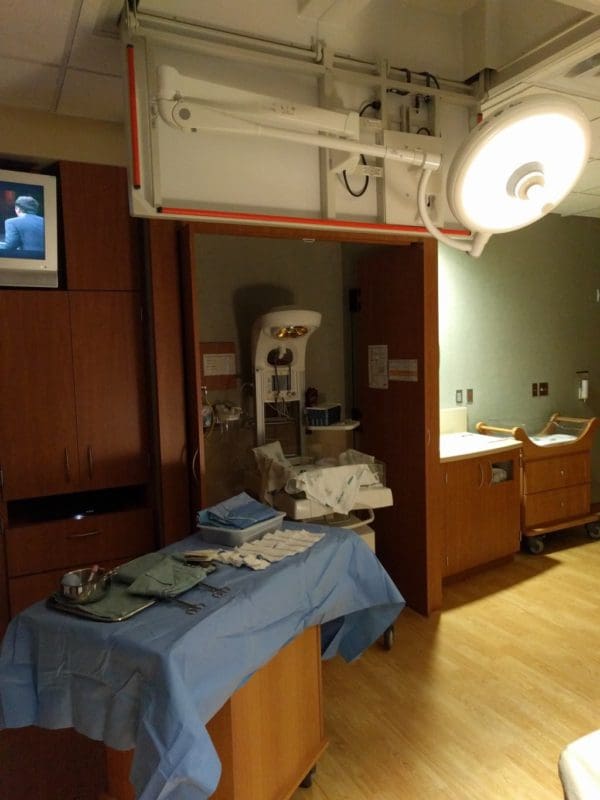 Monty Python and the Holy Grail was on in the background. The nurses would come in and laugh with us as they checked on my progression. Evening came and I was only at about 4.5cm when we learned the anesthesiologist’s shift would be ending soon. Contractions were getting to the point where I was starting to shed a few tears. I felt like I had experienced about as much of that whole natural labor thing as I really needed to. The nurse was kind enough to not call me a wuss. She simply said that everyone is different and I could do whatever I wanted. I decided I was totally ready to lose all feeling in my lower half. We might as well just get him in here rather than making him turn around once he got home.

The epidural. This was (physically speaking) the worst part of the whole labor and delivery experience for me – by a landslide. Being afraid of needles, it was absolutely horrifying – I still squirm just typing about it. It felt like that needle was making it all the into my organs, or my ribs, or I don’t even know… All I know is it sucked and was gross but was also totally worth it. I did have a minor mental freakout over the feeling/lack of feeling the epidural brought on. I eventually got over it as things continued on normally. The rest of the evening was spent watching movies, relaxing, and laughing. We were just all around having a pretty good time as the nurses came in and out to check on us.

Around 11pm the nurse came in again to check my progress and I was fully dilated and ready to push. I had a mini moment of panic as I had been starting to gain feeling in my abdomen and one of my legs. I asked for a bump in my epidural and was so relieved when they allowed it. They called my doctor to come in and the nurse decided to get me started. She prepped the room and watched for a contraction to have me push for the first time. Apparently, that first push was enough to make her second guess going any further without the doctor present so we waited patiently for her arrival while Jimmy Fallon gave us all a few chuckles.

The doc came in and resumed pushing when another contraction came on. We were joking and laughing and having a great time with Jimmy still on in the background. Then, I’ll never forget how the look on my doctor’s face drastically changed. I knew something was wrong. She was suddenly laser focused and the entire tone of the room changed. I blacked out her exact words after that moment as people rushed in and she had me wait on any more pushing. Next thing I knew, my doctor was somehow reaching up in me, grabbing my baby, turning her, and then pulling her out, with an eventual added push from me.  Thank God for that epidural.

What came next still leaves me with a pit in my stomach. Not hearing anything, I kept waiting for that newborn cry. Instead, all I saw was a blue/purple little baby being whisked away to the other side of the room, alarm bells ringing. I started panicking and crying over the fact that I still couldn’t hear my baby. My doctor locked eyes with me as she listened to the team tending to our baby behind her. They finally declared her APGAR score, which my doctor repeated to me. She emphasized that everything was going to be okay. My husband was able to go see her and trim her umbilical cord stump. The commotion died down and it was determined that our daughter hadn’t sustained any injuries during delivery. My doctor quickly requested that my beautiful cone-headed and bruised baby be brought to me.

The moment I got to actually see and hold that little girl was terrifying and beautiful and blurry all at once. Having had the epidural, I hadn’t realized how strenuous this experience was and how exhausted I was. I groggily looked down at this wonderful being and could hardly believe she was mine. I also remember a distinct feeling of not having any idea of what I was supposed to do with this small, seemingly so fragile babe. Terrified to move her, I knew it would take me quite a while to get past those awkward new mom movements.

I eventually asked the doctor what would have happened had she not been able to successfully get our baby out. She explained that she would have had to push her back in and do an emergency C-section. Our daughter had infant shoulder dystocia which means her shoulders didn’t turn correctly, so they got stuck in the birth canal. I had followed my birth plan – I got the epidural and trusted my doctor. And it turned out; she was the perfect person for the job.