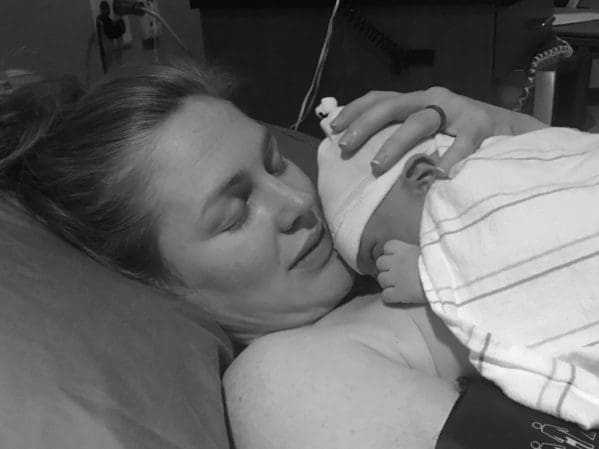 Alternate title: My Body is a Machine

Alternate-alternate title: A Long Story About A Short Birth

Summary (spoiler alert): I only know one way to have a baby — quickly, stubbornly, nearly in the car, standing up, on their due date.

As I neared the end of my second totally textbook pregnancy, I nodded and smiled as people predicted the birth date. My daughter was born rather spectacularly on her due date, so I wasn’t really mentally prepared for her sibling to be early or late. Turns out I didn’t have to be.

On Saturday, I walked around the State Fair all day. I felt nothing.

On Sunday, I went for a run. I felt nothing.

On Monday, I told my husband I somehow felt less pregnant every day and had accepted this as my permanent state.

The Part Where I Kind of Wet the Bed

On Tuesday, my due date, I woke slightly. I felt a little cramp because hello 40 weeks pregnant and rolled to adjust myself — then POP. Then GUSH. It was pretty clear my water had broken, just as it had to start labor with my first. But instead of kicking me into gear and out of bed, my first and overwhelming thought was, “I don’t really want to deal with this right now.” I somehow convinced myself if I stayed in bed I wouldn’t have to.

I rested for an hour, slept lightly and tried to determine whether I was any more uncomfortable than general way-pregnant seeping. After an hour, I couldn’t make myself sleep anymore, and things weren’t exactly feeling any drier so I figured I better get up and assess the situation like a responsible (and hygienic) adult.

I stood up to a massive gush. Grabbing a nearby towel, I waddled downstairs to not wake my peacefully sleeping husband. I was soaked. Towel, shorts, underwear. I hadn’t brought backups downstairs with me, so I walked around pants-less figuring out what to do.

I didn’t feel anything going on, but I remembered something my midwife or doula or someone casually mentioned along the line: “They” say second labors go about twice as fast as the first ones for a lot of women. Since my last time at the rodeo went relatively quickly, at 2:45 a.m. I called my midwife’s answering service, and texted our doula and nanny so they’d wake in the morning to a heads-up that something might happen, oh, in the next day or two.

The Part Where I’m Super Nonchalant (Read: In Denial)

Pacing around in the dark, I did little things like packing my daughter’s lunch and tidying up. I started feeling some light cramps, and because I knew both my midwife and husband would ask, I downloaded a contraction timer app in the off chance the cramps were early contractions. I failed at really timing them – they had no distinct beginning or end so I got bored pretty quickly and wrote off the 5-6 minute average as user error.

My midwife called back and I gave her the rundown. She told me I was in early labor and likely had four or more hours before things would start to pick up. Lie down, try to rest, don’t worry about timing contractions, she said. Call if anything changes. Oh, and by the way, the hospital is full so maybe try to hang in there until it’s not. I figured I had plenty of time.

It seemed unnecessary, but respectful to call our doula and nanny to give them the scoop. Then I lay on the couch and put on a Hypnobabies audio track to relax for a bit. Noticing the cramps picking up, I admitted to myself it was the beginnings of the real deal and figured I better get myself organized at some point. I started calculating doula travel time and daycare dropoff and hospital traffic just in case and figured, while I didn’t really want to yet, the responsible thing to do was to wake my husband.

I poked him gently and calmly – too calmly – told him not rush, but to get himself ready and meet me downstairs to make some decisions. By the time he got there, I was back on the couch with my Hypnobabies playing and had to breathe through what were very manageable but clearly contractions. He timed a couple, determined they were 3-4 minutes apart and sprinted away to get things moving while I laid on the couch and sent some emails. (My favorite, at 4:33 a.m., to my parents, casually suggesting they plan to pick up our daughter from school at the end of the day, you know, just in case.)

Luckily my husband was taking things much more seriously than I was, and our nanny arrived within the hour to settle in before our daughter would wake. I paced slow laps around the dining room table; headphones on, stopping to chitchat between contractions as we awaited our doula who I was convinced totally didn’t need to come yet.

The Part Where I Don’t Wanna

Our doula arrived. She observed a contraction or two and told us it was time to go to the hospital. Right now. I didn’t feel like it was at all time yet, but in the spirit of not being stubborn/causing my husband to nearly have a heart attack like with our first, I agreed to go. We’ll get to the hospital a few hours ahead of time this and settle in, I thought. Fine.

We quietly shuffled out our front door. I had a big contraction on the way to the car and paced the sidewalk in front of our house in my nightgown in the dark and thought, I’m coming back to this house with a baby. It felt crazy and magical and peaceful. The contraction ended, and I got in the car. I had a couple contractions during our short drive which were not my favorite, but completely manageable with my headphones in and headband pulled down over my eyes. (Good thing I was blissfully unaware when my frantic husband just about made a wrong turn – not that surprising since he blew two red lights on the way to our wedding.)

We got to the hospital quickly and uneventfully; we pulled into the roundabout and my husband jumped out to open my door. Then I had The Contraction. The One. The Time When Your Body Starts Pushing Whether You Want To Or Not. I was not getting out, despite my husband’s pleading. After it subsided, we made it into the lobby and I demanded a stop at the public restroom before taking the elevator up to Labor and Delivery. “I just really have to pee,” I told him. “I can’t do this until I pee.” (Hint: I didn’t have to pee, I had to give birth.)

I’ll highly edit/summarize this next part, because it’s really gross: The bathroom was like a scene from a septic-system-murder mystery. Something bad — BAD — happened in there at some point in the night. My husband pleaded with me to leave, just get up to Labor & Delivery NOW. I wouldn’t do it. I LOCKED MYSELF IN THE BODILY-FLUIDS-MASSACRED BATHROOM ALONE and tried to pee. Then I realized I was potentially contributing to the bodily fluids, so tried to clean myself up a little, splash some water on my face, get myself together, you know. My husband knocked on the door. Begged me to come out. Told me I had to get out. Now. I yelled for him to go away a few times before deciding it was, in fact, probably best to birth my baby in a clean, private room with medical professionals.

The Part Where Baby Breaks a Land Speed Record

We met our doula when we came off the elevator. I swayed back and forth to my hypno track, headband pulled over my eyes, and feeling as if all this was happening to someone else, as my husband and our doula animatedly explained to the desk staff that there was no time for triage. I needed a room – I was PUSHING. They took their time, underestimating the power of my hypnosis practice and assuming a paternal overreaction until someone told them to either get me a room or call my midwife to deliver the baby in the elevator lobby. That got things moving, and a nursing assistant appeared with a wheelchair. Our doula shooed it away and I made the long, slow shuffle down the hall to a delivery room.

I refused to lie down so they took baby’s vitals as I stood and swayed. They asked if I wanted them to fill the birthing tub. Sure, I said, and they turned on the water, knowing full well I wouldn’t have time to use it. I had the distinct feeling of having to pee again, right now, and made my way to the bathroom. Kicking my husband out again, I preferred my doula and nurse stay close, and at some point, the midwife appeared.

I think I had three more contractions in that tiny bathroom. After the first, I yelled for my husband to get back and assume an athletic stance for me to brace against standing up. The midwife squatted down to check things, and said matter-of-factly, “Kate, you’re going to have two more contractions. The first, you’re going to push your baby’s head out. The second, you’re going to push your baby’s body out. Then you are done.” When she said that, it’s like I was back in my body and mind. “Oh!” I said, “OK.” I got this, I thought. She was right. One push and I felt major déjà vu as the head came out. Second push, I felt a giant, familiar whoosh and then total relief and lightness.

The first words my sweet baby heard earthside were mine: “HOLY COW!” (Except let’s be honest, the second word was most definitely not “cow.” Sorry, Sweet Pea.)

I scooped my baby to my chest, and the team helped us to the bed. As I got in, I saw a trail of very, very bloody footprints in my wake. I instinctively knew it was too much blood. Seconds later, I was getting a shot of Pitocin in my thigh to get it to stop. Luckily it did, and I realized no one had even told me whether the sweet babe nuzzling into me was a girl or boy. Maybe I semi-consciously heard a nurse whisper it, or maybe in that second I just knew, but I wasn’t at all surprised when my husband told me it was a boy. My boy.

Here right on his due date.

And, just as they said, he came in half the time his sister did:

About 19 minutes late, if you ask me. About 19 hours early, if you ask my husband. But as I snuggled up with my new son, I knew he was right on time.